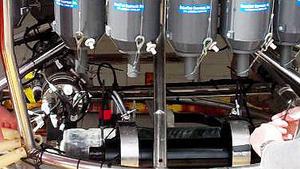 Today has been a long consolidation day.

Late last night an amphipod trap was deployed, ant that will be recovered later this evening so I will get some pictures then maybe.

Two of the PELAGRA traps which were deployed at mid-night on Wednesday were recovered last night but the third one was only recovered mid-day today, as its signal had not been detected up till then. Corinne Pebody deployed the zooplankton nets again at midnight and had a good haul of tiny zooplankton and the mega corer was deployed again this morning and was back on deck again late morning.

Since then we have been undertaking sub-bottom profiling which builds a high resolution map of the seafloor. I have been catching up on the paperwork, scanning in log sheets and filing in the station logs. I am also trying to get prepared to analyse some of the sensor calibration data which we recoded yesterday, but the PAP1 sensor team have been busy with preparing everything for the redeployment, which is planned for Sunday.

Tomorrow is going to be another busy day with CTDs, Mega Core and recovering and deploying the PAP3 sediment traps, so I am hoping to get to the gym for half an hour then I will get an early night.