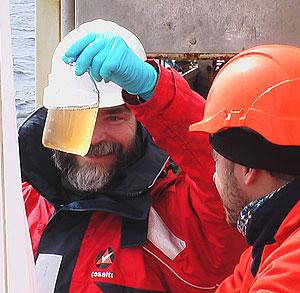 ... In this nutrient-poor ecosystem, algae not only photosynthesize, but also feed on bacteria...

A new study led by the National Oceanography Centre in Southampton has gone some way towards solving one of the biggest questions in marine ecology: how does life exist in a blue desert – the largest habitat on Earth.

The study, published in the Proceedings of the National Academy of Sciences, examined plankton from the surface waters of the North and South Atlantic, and showed that small algae (protists), previously thought to be the start of the food chain, consume bacteria that are particularly abundant in marine waters.

The relative scarcity of nutrients in the open ocean means that the energy economy at the beginning of the marine food chain is finely balanced – and until recently – very little understood.

Professor Mikhail Zubkov from the National Oceanography Centre, said “In much the same way as the Venus flytrap is able to inhabit nutrient depleted soils by feeding on insects, algae feed on bacteria in the nutrient depleted open ocean. Bacteria are convenient nutrient parcels, containing all the components necessary for building and maintaining cells.

“Conventional wisdom is that algae are the building blocks of the marine ecosystem, gaining nutrition by photosynthesis – using the sun’s energy to create their own food by converting carbon dioxide into sugars. However our findings, which were based on samplings from the North and South Atlantic, show that the picture is more complex than previously thought. In this nutrient-poor ecosystem, algae not only photosynthesize, but also feed on bacteria. They are predators as well as prey.”

Protists range in size between 1 and 5 microns (a micron is a thousandth of a millimetre), and contain chlorophyll, which enables them to photosynthesize. They are believed to fix nearly half the carbon that is absorbed by the world’s oceans. Until now, they were believed to be passive carbon fixers, extracting their nutrients from seawater.

The study – a collaboration between scientists at the NOC Southampton, University of Warwick, Plymouth Marine Laboratory and University of Plymouth – consisted of 68 experiments conducted over a three-year period on board the Royal Research Ships James Clark Ross and James Cook, which routinely travel between the North and South Atlantic waters.

Technology pioneered by the National Oceanography Centre, which specifically pulse-label bacterioplankton with isotope tracers, allowed the researchers to sort and study feeding of algae with cell sizes as small as one micron.

The study builds upon the preliminary results of Zubkov and Tarran who stumbled across the phenomenon while studying the grazing of heterotrophic protists upon bacteria in waters near Iceland. Although mixotrophy – the ability to get energy from photosynthesis and grazing on other organisms – was first seen by microscopy 40 years ago, it has not been shown to be a widespread phenomenon until now.

The overall contribution of bacterivory to phytoplankton has been assumed to be largely insignificant in the ocean. The organisms are small, but their collective impact on the world’s carbon cycle is big. Their sheer numbers and the size of the oceanic habitat means that algae and bacteria drive global recycling of carbon and nutrients.

The findings also reposition bacterioplankton in the food web. Previously they were assumed to have a role in mopping up the waste created further up a linear food chain. However, like protists, their role is both different, and considerably more complex, than was previously thought.

Although the phytoplankton feed more slowly on bacterial cells compared to the heterotrophic protists, the sheer scale of their populations means that, overall, they are the main predators of bacteria in the open ocean, responsible for 60-75% of bacterivory across the Atlantic Ocean.

Mikhail Zubkov added “These findings go some way towards answering a big question about how life can exist in the low nutrient, ocean blue deserts that dominate our planet – and give a steer about the subtleties of the little-known process of carbon fixation at the beginning of the food web in this environment.”