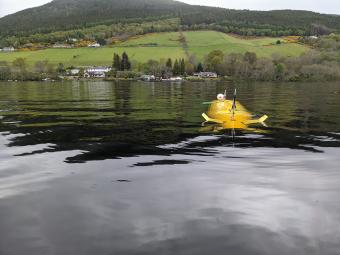 The Oceanids programme has meant we’ve been able to progress the technology behind our underwater vehicles, pushing the UK’s autonomous capability forward

The latest phase of Oceanids – a programme with several industry partnerships which aims to put the UK at the forefront of world-class autonomous technology development – includes the piloting of the latest version of the NOC’s successful Autosub Long Range (ALR) vehicle to ensure its capabilities are ready for scientific deployments anywhere in the ocean. The newly developed ALR, better known as Boaty McBoatface, offers a step change in capability compared to the earlier model.

With trials in Loch Ness running from Tuesday 18 to Saturday 29 May, this major project milestone is putting the technologies to the test, gearing up for the UK’s marine science community to use the robots in unexplored and technologically challenging under-ice and deep-ocean environments.

Capable of being deployed for up to three months and reaching depths of up to 6,000 m, the fleet of six ALRs will open new opportunities for lower cost shore-based scientific missions and under-ice exploration. Development of new navigation features will also allow scientists to research areas that could not previously be reached by boat, such as under and up close to melting icecaps. The Loch Ness trial will be proving new technologies that will be used to deliver a ground-breaking science expedition in 2022 to explore the melting Thwaites Glacier.

Dr Kristian Thaller, Project Management Manger from the National Oceanography Centre, said: “The Oceanids programme has meant we’ve been able to progress the technology behind our underwater vehicles, pushing the UK’s autonomous capability forward. These vehicles are the next generation of pioneering systems that will push the boundaries of how we look to explore the ocean in the future.

“The trials in Loch Ness will ensure that UK researchers have access to cutting-edge technologies that enable world-leading science, whilst lowering the cost and reducing the environmental impact of missions by removing the need of a supporting research ship. Our development in autonomous vehicles means that scientific research is one step closer to net-zero emissions, because of the advances in the robots’ technology systems.”

In addition to the ALR, the NOC is also conducting the first in-water trials of a newly developed Autosub 2000 Under-Ice vehicle, which is capable of carrying high-powered sensors and has the ability to operate in challenging polar environments.