Three-miles down, 30-year study, the giant amphipods are changing 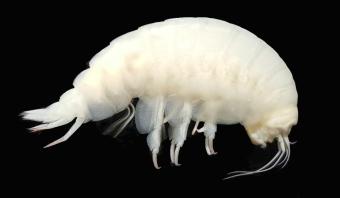 There are very few deep-sea studies that can match this 34-year record of change in the abyss.

Studying samples that date back to 1985, NOC scientists have discovered that the key scavengers of the deep-sea floor have changed in a way that matches changes in surface ocean climate.

The work has also discovered a new species in the giant amphipod genus Eurythenes. Published in the journal Progress in Oceanography, the study results suggest a significant shift in the composition of scavenging amphipod communities following a shift in surface ocean conditions known as the Atlantic Multi-decadal Oscillation (AMO).

For example, ‘cool’ phases of the AMO corresponded to a greater richness in species, and a shift in the dominant species.

Led by senior visiting research fellow Mike Thurston, the first visit to the PAP-SO occurred in June 1985, and its first successful operation was the deployment of an experimental amphipod trap system that rested on the seafloor for 4½ hours and returned 28 specimens, including the giant amphipod then identified as Eurythenes gryllus.

NOC scientist, and manager of the Discovery Collections facility at the NOC, Dr Tammy Horton said: “The work that Mike Thurston began at the PAP-SO continues today, with our most recent samples collected in July 2019. There are very few deep-sea studies that can match this 34-year record of change in the abyss”.

Detailed studies of these samples, including the use of molecular genetic techniques, have now shown that there are three species of giant amphipod at the PAP-SO, Eurythenes maldoror, Eurythenes magellanicus, and a previously unknown new species of Eurythenes that is now being formally described and named. Click here to read the article.

Originator of the study, Mike Thurston said: “From a couple of specimens in the first catch in 1985, we now have over 5000 specimens of PAP-SO giant amphipods in the Discovery Collections. It is the careful study of these, and other amphipods caught with them, that has allowed us to see how life on the deep-sea floor has been changing over this 34-year time span”.

Tracking changes in the PAP-SO scavenging amphipod populations through time, the NOC team have revealed that the seafloor community has changed in a way that mirrors changes in the surface ocean climate and that may have changed the amount and types of food that these creatures receive 3-miles below. Click here to read the article.