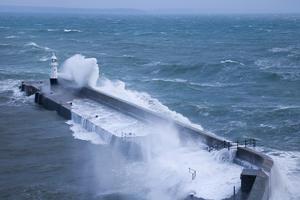 Anna Rumyantseva, the lead author of this research at the National Oceanography Centre (NOC), said “By learning more about what encourages the growth of these greenhouse gas absorbing blooms, this finding contributes to a growing understanding of the importance of the ocean in global environmental change.”

These microscopic marine plants, or phytoplankton, play a key role in moving CO2 from the atmosphere into the deep ocean, as well as forming the base of the marine food-web. To fuel their growth they absorb atmospheric CO2 and nutrients from the top hundred metres of the ocean. This depletes the upper ocean of nutrients. Understanding the processes of replenishment has preoccupied oceanographers for generations, partly because of suggestions that global environmental change might suppress it.

Writing in Global Biogeochemical Cycles, Anna describes how storms drive turbulence in the ocean causing nutrients to ‘well-up’ from the deep. This process can result in up to a tenfold increase in nutrient concentrations in the surface layers of the ocean during a storm. Subsequent measurements of small turbulent structures within the ocean enabled scientists to quantify the ‘stirring-up’ of nutrients resulting from the interaction between storm winds and currents. A few days afterwards scientists measured a 50% rise in the concentration of chlorophyll, which suggests phytoplankton numbers had increased.

This study is the first that has linked storms and ‘marine productivity’ in the northern North Atlantic due to the challenges of conducting ship-based measurements during storms. The team at the NOC solved this problem by using robotic gliders, which can continue to take measurements regardless of the weather.

Dr Stephanie Henson (NOC), who co-authored this paper said “Technology such as robotic gliders is enabling scientists to take measurements in places, and at times, that have previously been out-of-reach.”

This research was funded by the Natural Environmental Research Council (NERC) as part of the OSMOSIS project, which includes the Universities of Bangor, Oxford, East Anglia and Reading.