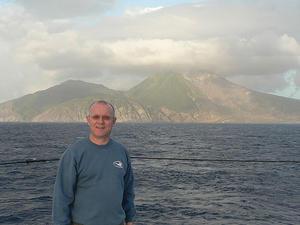 Professor Martin Palmer has been named as a Geochemical Fellow by the Geochemical Society and European Association of Geochemistry (EAG).

Since 1996, the EAG and the Geochemical Society award the honorary title Geochemical Fellow to outstanding scientists who have made major contributions to the field of geochemistry.

Professor Palmer, who is Head of the University’s Geochemistry Research Group, received his honour in recognition of over three decades of interdisciplinary research in the geochemistry of Earth Surface processes. This has involved studies of volcanism in collisional and subduction zones, submarine and subaerial geothermal activity, ore deposits, marine sedimentary processes, river water chemistry, biomineralisation, sensor development and the impact of subaerial volcanism on the oceans.

He also has a broad range of research interests that reflect his initial training in chemistry. This work includes the application of geochemical techniques to archaeological studies, the sources and impacts of dust in human health, the chemistry of landfill leachates, and the role of metals in the human body released from prosthetic implants.

Professor Palmer, who is based at the National Oceanography Centre, Southampton (NOCS), will receive his honour at the 2014 Goldschmidt Conference in Sacramento, CA, USA.

He says “It is a great honour to be recognised by my fellow scientists from around the world by this award. I have been very fortunate to have worked with some outstanding individuals over the years, including the present members of the Southampton Geochemistry Group and the wider University and NOC community – my thanks to them all.”