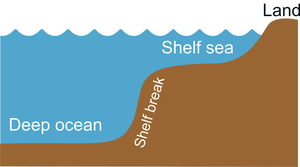 Last week, researchers convened in Liverpool to discuss a science programme investigating the shelf seas fringing the UK and Europe.

The Shelf Sea Biogeochemistry research programme – co-funded by the Natural Environment Research Council (NERC) and the Department for Environment, Food and Rural Affairs (Defra) – is a collaborative project involving multiple research institutes, including the National Oceanography Centre (NOC) and the Universities of Liverpool and Southampton.

‘Shelf seas’ is the term given to the relatively shallow waters that fringe the continents. With depths of 200 metres or less, they are relatively shallow, given that the average depth of the ocean is about 4,000 metres. Shelf seas are also characteristically highly productive – while only accounting for around 7% of the surface of the ocean, they sustain over 90% of global fisheries.

However, this important habitat is under pressure from man-made environmental stresses. The programme aims to investigate what happens to both nutrients and carbon in UK and European shelf sea environments, and how these processes impact the health and productivity of global marine ecosystems. Ultimately, this and related efforts aim to deliver science to underpin more sustainable use of UK shelf seas.

The programme is split into various work packages, each looking at a different aspect of the shelf seas habitat such as the water column and seafloor, and how best to quantify change. Several aspects are led by NOC and the Universities of Liverpool and Southampton researchers.

Under the programme, Dr Henry Ruhl will be one of the first scientists to lead a science expedition aboard the new Royal Research Ship Discovery, which was named in October last year by HRH The Princess Royal. The expedition, scheduled for March this year, will be exploring the seafloor of the Celtic Shelf, which is located beneath the Celtic Sea.