Scientists to study marine carbon storage around the Isle of Man 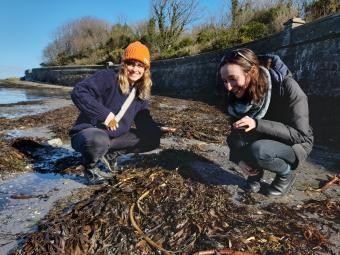 By capturing carbon in the seabed, seawater and marine life, the ocean plays a key role in keeping it out of the atmosphere, thereby reducing harmful climatic change.

A study is underway on the Isle of Man to investigate, for the first time, the Island’s marine and coastal role in storing carbon to help mitigate climate change.

Scientists from the National Oceanography Centre (NOC) will work closely with marine scientists from the Department of Environment, Food and Agriculture (DEFA) and Swansea University to quantify how much carbon is stored in the territorial sea around the Isle of Man, also known as ‘blue carbon’.

The Blue Carbon project will provide an in-depth assessment of blue carbon habitats around the island, including offshore mud habitats, and aims to identify areas where carbon stores could be protected and managed in Manx territorial seas. The 12-month study will see scientists gather data by mapping key areas around the coastline with a drone to identify and analyse habitats, including seagrass meadows and kelp beds.

Blue carbon habitats like seagrass meadows, which are found around the Isle of Man, capture significant amounts of carbon, and they can also protect coastal communities against storms and flooding, improve ocean health and provide habitats for a multitude of species and commercially important fisheries. This project will see scientists collect samples from nearshore sites and deep-water areas to ascertain their ability to store carbon, taking sediment to conduct further studies at the National Oceanography Centre’s facilities.

The study will enable greater understanding for the potential to protect and enhance carbon sequestration and storage, through either management or restoration, with the study supporting the Manx government’s ambition to achieve carbon neutrality on the Isle of Man by 2050.

Hannah Muir, PHD student at Swansea University, said: “The Manx Blue Carbon Project will help to advance our understanding of the amount of carbon that is currently stored in different habitats in the Manx territorial sea and identify the potential for future carbon sequestration, both near the shore and in the deeper waters. The data generated from this exciting project will build an evidence base that could inform how the Manx territorial waters are managed to maximise carbon sequestration and storage, while maintaining and enhancing biodiversity and other important ecosystem services."

Dr Claire Evans, Research Fellow at the National Oceanography Centre, added: “By capturing carbon in the seabed, seawater and marine life, the ocean plays a key role in keeping it out of the atmosphere, thereby reducing harmful climatic change. This exciting project will provide the data required to understand how best to preserve this blue carbon, thus supporting informed management of the Isle of Man’s territorial waters.”