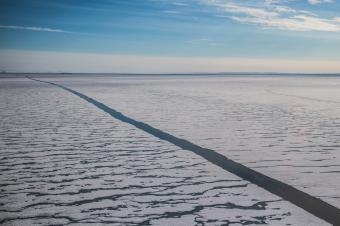 Scientists from the National Oceanography Centre (NOC) along with partners from UiT The Arctic University of Norway are now able to measure the thickness of ice in the Arctic Sea 365 days a year using satellites.

In addition to being a hugely important shipping lane, the Arctic Sea is also vital for weather and climate forecasting. The solution was developed by an international team from Norway, UK, USA, Canada, and Germany.

The research could have dramatic ramifications for shipping in the Arctic Sea which has increased rapidly in recent years, in part because of the ice melting. The number of ships entering the Arctic has increased 25% during the last decade alone, particularly in the Barents Sea and close to Svalbard, where the shipping activity is high during summer. Sea ice poses a critical hazard, particularly to small and medium tonnage vessels and to sail safely, ships need accurate information about where there is ice and how thick it is, in advance. The Norwegian Meteorological Institute provides sea ice forecasts for the Arctic but have lacked reliable information concerning ice thickness for the summer months.

Team leader Jack Landy, at the Department of Physics and Technology at UiT, said: “The Arctic ice is melting faster than ever. We need information about the thickness of the sea ice, both to reduce safety risks for businesses and shipping in the Arctic, but also to make more accurate forecasts for the future climate."

Satellites have previously been used to measure the thickness of ice in the Arctic dating back to the 1980s. But the technique has only worked in winter, from October to March when the ice and snow are cold and dry, as the satellites were unable to distinguish between melting ice and sea water. To solve the problem, researchers adopted Artificial Intelligence (AI) by using the Convolutional Neural Network methods to classify sea ice and open water leads and examined data from the satellites. This led to them being able to identify when the satellite sees the ocean as opposed to melting ice. The advantage of this is to improve robustness of the satellite thickness measurements and extend lead time of the sea ice forecasts by several months.

Jack Landy added: “Using the new satellite data, we are finally able to make sea ice forecasts informed by the ice thickness, all year round, thereby reducing risks for ships and fishing boats. We can also predict whether there will be ice or not at a given location in September, by measuring the ice thickness in May, helping shippers to navigate much easier.”

In addition, the scientists constructed a new computer model of the satellite sensor, to ensure it is measuring the correct height and thickness. The research team has developed the first dataset showing the thickness of sea ice across the entire Arctic and through a whole year.

Dr Michel Tsamados, Associate Professor from University College London and one of the researchers behind the study, said: “When we use the new ice thickness data in advanced climate models, it will improve both our short-term forecasts for the weather at the mid-latitudes and the long-term forecasts that show what climate we will have in the future."

Dr Yevgeny Aksenov, Principal Researcher at the National Oceanography Centre, concluded: “Sea ice thickness is a key factor in designing operational forecasting and hazard warning systems for Polar navigation, since it affects the safe speed of vessels in icy conditions. However, looking only at sea ice conditions can also be misleading. Other hazards, such as high ocean waves frequently occurring in the Polar seas in the absence of sea ice, can damage ships and offshore structures. We also need awareness of other combined hazards, such as ship hull and offshore structures damaged by sea ice and waves in the Polar environment as they have wide relevance to maritime industries safety.”

Read the full paper at Nature