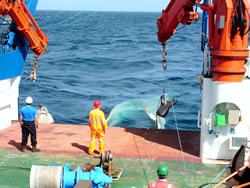 It’s 6 o’clock in the morning and the entire science party is dressed in brightly coloured waterproofs, steel-capped boots, and hard hats, waiting impatiently in the hanger.

We are not allowed out onto the aft deck, since the crew is busy hauling in the trawl. Over the past few hours, the OTSB (Otter Trawl Semi Balloon) collected a representative sample of animals that live on the Porcupine Abyssal Plain. It’s an extraordinarily rare opportunity to get a first-hand glimpse at organisms that live in a world so remote and hostile some 3 miles below the ocean surface. It is difficult to comprehend how anything can survive at a place exposed to such enormous pressure, eternal darkness, low temperatures and very little food. Despite such harsh conditions, however, the deep sea is teeming with life! And this time, it is not just photographs that show us the evidence but we get to see, touch, and smell it. 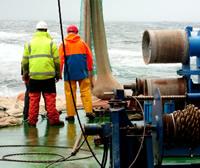 After several hours of deployment, the crew has successfully hauled back the net from the abyss and onto the deck. Immediately, an organized frenzy begins. As soon as the catch has been transferred from the net into large buckets, everyone gets stuck in to marvel at the bizarre creatures that were caught. Juliette and Milly rush to grab all the fish to take a closer look at their eyes (see Juliette’s blog), Chrysula is keen to get her hands on the sea cucumbers (holothurians) to get some tissue for her molecular analysis, Lenka and Clair roam through the sample for bristle worms (polychaetes) and the people from Southampton are eager to get their hands on the remainder to add to their extensive specimen library in the NOC Discovery Collection. 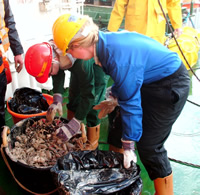 Although the work goes on for hours, it doesn’t stop being exciting to weigh a 30 cm long purple sea cucumber, to find yet another beautifully delicate brittle star (ophiuroid), to measure the various bright red shrimp, and to be in awe of the many eerie-looking fish with enormous fangs and unhinged jaws (and to be hugely relieved that they’re only the size of a small purse). When it’s all over, everyone’s exhausted and slightly smelly. At the same time, we are already looking forward to the next trawl in a few days time. 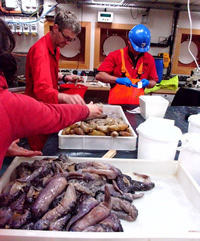 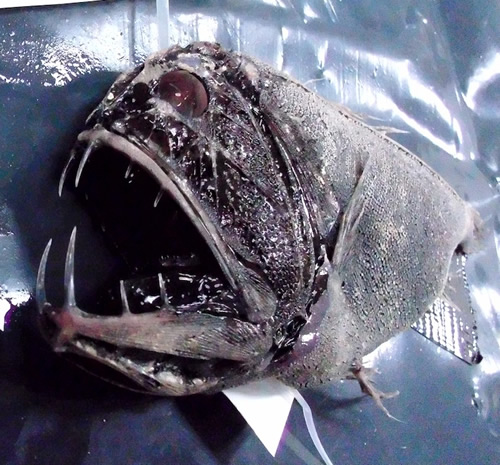