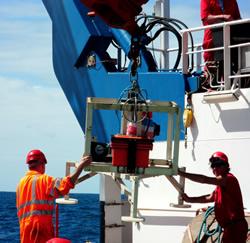 Today, we have finally arrived on site, which meant it was time to deploy several exciting instruments. This might sound fairly straightforward but in reality it can be quite daunting to watch thousands of pounds worth of equipment being dropped over the side of the ship and the scientists rely on the experience and finesse of the technicians and the crew. 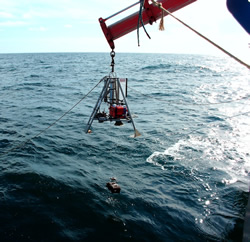 First on the to-do list was Bathysnap, which is basically a frame with a digital camera attached to it. Once it is deployed Bathysnap sinks to the bottom of the sea, where it will remain over the next few weeks to take high-quality pictures of the seabed and of all the limelight-seeking critters that walk passed. In fact, you would be surprised how many beasts roam about at nearly 5,000 m, especially considering that PAP is a muddy abyssal plain. This type of habitat, however, is similar to most of the seafloor globally and thereby represents the largest habitat on the planet. The pictures taken by Bathysnap show that the deep seafloor is covered in tracks and holes produced by a myriad of animals, such as sea cucumbers, sea urchins, worms, and many other creatures too small to capture with even the fanciest camera. All of them, however, rework the sediment constantly leaving visible marks, or Lebenspuren, on the seafloor surface. Deep-sea biologists believe that these creatures of the deep play thereby an important role in the burial of carbon, which affects our global climate. 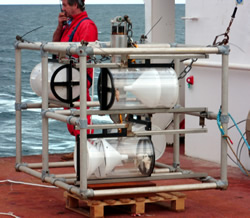 Second on the to-do list was the Baited Camera Lander. Alan has taken the Oceanlab Lander around the world to capture amazing images of deep-sea fish, including the deepest ever fish to be caught on camera down at 7,700 m in the Japan Trench. Today, the Lander was deployed to hover just a few meters above the seafloor (~4,600 m at our current location). Equipped with two cameras, it will take photographs of deep-sea fish to estimate abundance and diversity at the PAP site. At the next deployment, the Lander will sit directly on the bottom with the camera facing horizontal to the seafloor rather than downward. The resulting images will be better suited in helping to identify different fish species. 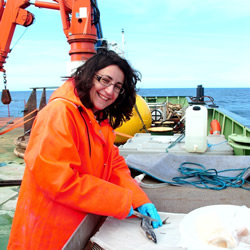 Third on the to-do list was the deployment of the amphipod trap, which unsurprisingly traps little scavenging crustaceans, called amphipods. These feisty beasts are very common in the deep sea and feed on the dead remnants of other deep-sea creatures. To lure them into our trap, we neatly wrapped up defrosted mackerel and attached them at the end of four double funnels traps, much like a beetle trap or catching a wasp with a jam jar. The amphipods will then be taken back to the laboratory, where they will be counted and identified.

And finally, the WASP system (Wide-Angle Seabed Photography) hit the water at 9pm. It uses a video and stills camera to capture the seabed, while being towed at 0.5 knots over several hours. In the next few blogs you will hear from some of the scientists on board giving you their take on what’s going on and why they decided to spend half their summer on a ship in the NE Atlantic. Also, a deep-sea trawl has been scheduled for the upcoming weekend (assuming the weather behaves!) and you do not want to miss that! Ahoy for now...