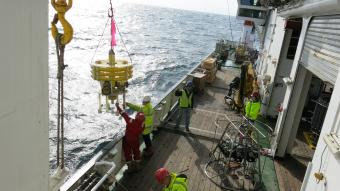 This time, a limited number of scientists and technicians are travelling to the Porcupine Abyssal Plain Sustained Observatory (PAP-SO) in the North East Atlantic at 49°N 16°W where the water is 4850 m deep.

The PAP-SO is a long-running open-ocean time-series study site with a focus on biogeochemistry and ecology through the full water column and the connections between processes at the surface and seabed. Funded by UK Research and Innovation through CLASS, NOC scientists visit PAP-SO every year to take samples, make new observations, and service the infrastructure.

This year the regular spring/summer visit to PAP-SO was delayed because of the pandemic, but it is important to ensure data and samples are recovered for analysis and interpretation, minimising the impact on the time series. It will be a challenging time of year to do this with high winds and waves expected.

Part of the infrastructure, a large surface buoy, became detached from its mooring during Hurricane Epsilon shortly before DY116. It was successfully recovered by the German research vessel FS Maria S. Merian, however, this is just one component of the observatory and other moorings need to be recovered and if weather conditions allow, replaced with new ones.

The animals that live on the abyssal seabed at PAP-SO feed on the marine snow that arrives on the sediment. Their responses to food input are observed with a time lapse camera called Bathysnap. (Read the Paper) The most recent Bathysnap deployment will be recovered as part of the DY116 programme.

The upper ocean processes that influence those deeper in the water column are monitored with sensors on the surface buoy. If weather conditions and sea state allow, a new buoy will be deployed at PAP-SO in collaboration with the Met Office. The buoy can be seen in the being loaded onto RRS Discovery and gives an impression of the amount of rope required for a buoy moored in nearly 5000 m of water.

As well as working with the moorings the PAP-SO scientists will use a CTD to calibrate the instruments recovered from the moorings and collect water samples. It is unusual to be sampling at PAP-SO in November, so DY116 provides an interesting opportunity to add a seasonal dimension to the work by sampling a water column, well-mixed to several hundred metres and study carbon and nutrients at deeper depths.

The transit to PAP-SO from Southampton passes the Whittard Canyon, another CLASS study site. To support the ongoing work at the Whittard Canyon site, DY116 plans to recover another sediment trap from the site so the data can be worked on to inform future research there. We will be busy measuring the surface ocean between the two sites, testing new instrumentation for carbon dioxide measurements. As these are autonomous, they will continue to give us information on the uptake of this greenhouse gas, whatever the weather may hold for us