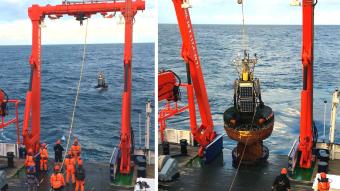 Last week a NOC Ocean Observatory in the North-East Atlantic was torn from its mooring by high winds and waves associated with the remnants of hurricane Epsilon that struck the UK a few days later.

Yesterday, after 12-days adrift, the large observatory buoy was safely recovered thanks to the efforts of the German oceanographic research vessel the “MARIA S. MERIAN”.

The buoy, deployed in partnership with the UK Met Office, is part of the Porcupine Abyssal Plain Sustained Observatory (PAP). It is a key asset of the UK Research and Innovation project Climate Linked Atlantic Sector Science (CLASS) managed by the NOC, providing meteorological and sea surface data for Europe’s Atlantic margin.

The NOC deployed the buoy in July 2019 and were able to detect and track its movement via GPS alert signals. With this year’s research expedition to the observatory delayed by the coronavirus pandemic, the NOC team were not expected to be in the vicinity of the buoy until next week. And so, a call was put out to the Ocean Facilities Exchange Group, a consortium of research vessel operators in France, German, the Netherlands, Norway, Spain, and the UK, that provides mutual cooperation in marine scientific interests and activities.

The German Research Vessel “MARIA S. MERIAN” was able to answer that call and the German Research Fleet Coordination Centre in Hamburg began a close liaison between the NOC, the German Fedaral Foreign Office, the ship’s Captain, Ralf Schmidt, and Principal Scientist, Dr Timm Schoening of the GEOMAR Helmholtz Centre for Ocean Research in Kiel. The vessel sighted the buoy at 07:50, 5 November, attached to it at 08:31, and had it safely secured on deck at 08:41, a remarkably efficient operation for the open ocean recovery of a four-tonne buoy that stands some six metres tall.

The NOC is grateful to all involved in the successful recovery of the buoy and the important scientific data that it carries.