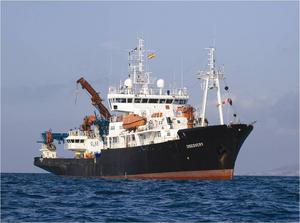 Much of our understanding of past climate comes from measurements of marine sediments.

RRS Discovery sets sail for the South Atlantic on 17 October to investigate the metals vital to marine life. These metal micronutrients act as fertilizers in the ocean affecting global climate and in turn, societies and economies around the world.

The 39-day expedition leaves Cape Town crossing the South Atlantic to Montevideo studying the processes that supply metals, such as iron and zinc, which are essential ‘fuel’ for ocean ecosystems.

Some 24 scientists from ten UK institutes, all part of the UK-GEOTRACES consortium, will be aboard the Discovery, one of the Natural Environment Research Council’s royal research vessels, to collect samples and carry out experiments.

Professor Gideon Henderson of Oxford University’s Department of Earth Sciences and the Oxford Martin School is leading the consortium. He said ldquo;Metals such as iron and zinc are vital nutrients for marine life and, by controlling the abundance of this life, they indirectly control the carbon uptake of our oceans and so affect our climate. Because they are present in seawater at such low concentrations they are difficult to measure but with this new expedition we hope to revolutionise our understanding of the metal ‘micronutrient’ cycle and gain insights into the past, present and future of Earth’s climate.”

Dr Rachel Mills from the University of Southampton’ School of Ocean and Earth Science – one the consortium’s leading partners said “Much of our understanding of past climate comes from measurements of marine sediments so understanding how such climate information is reflected in the chemistry of the sediments is essential if we are to interpret this evidence correctly. Understanding the cycle is also vital if we are to assess whether proposed geo-engineering schemes, such as ‘seeding’ the oceans with iron to increase their carbon uptake, might work.”

The RRS Discovery will head to the South Atlantic where the ocean is particularly rich in life, but where the sources of micronutrients are a mystery. By collecting samples, and making a wide range of measurements both onboard and back in the lab, the research team hopes to learn how the metals enter and leave the ocean, and how their abundance in seawater influences marine biology.

‘Understanding changes in the productivity of our oceans will help us to understand global climate change,’ said Professor Henderson. ‘However, changes in marine ecosystems also have a wider impact: these ecosystems are vital for food production, biodiversity, international development, tourism, and pollution management. Any changes in the cycling of micronutrients in the South Atlantic will have an impact not just on the local area but also on the natural resources, economies and standard of living of countries around the world.’

The UK-GEOTRACES consortium is comprised of ten UK institutions: The Universities of Oxford, Southampton, Edinburgh, East Anglia, Plymouth, Manchester, Cambridge, and Imperial College London, the National Oceanography Centre and Plymouth Marine Lab. A related NERC-funded project is also being conducted by the Universities of Oxford, Southampton, and Bristol.

The cruise leaves Cape Town, South Africa, on 17 October 2010 and is scheduled to dock at Montevideo, Uruguay, on 25 November. The consortium website www.ukgeotraces.com will feature a blog with daily reports of the mission’s progress.