As promised yesterday, today’s entry focuses on cold-water corals and is written by Laura Wicks and Sebastian Hennige, who, together with Murray Roberts (all from Heriot-Watt University), are carrying out the work. 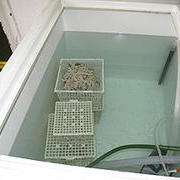 Although the mention of coral reefs may conjure up images of tropical seas and sandy beaches, cold-water corals are found in a very different habitat: cold, dark sub-surface waters often hundreds of metres down. Despite this they are even more diverse than their tropical counterparts, and in 2003 they were mapped off the isle of Mingulay at about 150m depth. Yesterday, at 5am off Mingulay, we started to collect some of these corals for ocean acidification research. Despite the lack of palm trees in the Outer Hebrides, the cold water coral sampling started under admirable clear blue Scottish skies and in a relatively calm sea.

The reef complex found off Mingulay represents a unique opportunity to study the ecology and importance of these cold water corals (Lophelia pertusa), but obviously the depth of the reef makes sampling difficult. We circumvented this by using multibeam and sidescan sonar from previous research trips to pinpoint the positions where live coral could be found on the reef. Once the ship was in position, equipment was sent down and operated from deck with a live camera feed, which enabled us to select and sample specific portions of coral colonies. These samples were then returned to the ship and put into "coral hotels", which are purpose made units which can house coral under precise environmental conditions.

The day did not go off without a hitch however, and on the second sampling run, our equipment was fouled by a lost lobster pot and anchor chain. This damaged the umbilical line which sends power to the equipment, lights and camera on the seabed. This power is crucial as the lights and camera feed are key parts to sampling corals effectively. Luckily, it did not take more than an hour to replace the umbilical line with a spare one, but to frustrate us further, the lobster pot even had a small colony of coral growing on it just to let us know that we were in the right area before we were fouled!

The weather stayed good all through the afternoon but come the evening the promised bad weather started to appear and the wind and rain started to pick up. Despite this, we were successful in getting everything we needed with regards to coral samples and associated fauna, so now we can conduct short term experiments on board the RRS Discovery. These experiments will focus on characterising the physiology and baseline characteristics of these corals under present and predicted future conditions, as, to date, not a lot is known about these important ecosystem engineers.

After leaving the shelter of Mingulay this morning, we headed off into a large swell (it is somewhat disconcerting while having a meeting to see waves wash over the windows!) and have now commenced upon a long semi-circular sweep round the west of Ireland.