When we got up this morning we were met with a surprising and rather wonderful scene (see photo). It was as if we had suddenly been transported to a different climate overnight, or to a placid lake.

The sun was out in a blue sky and the sea was strangely calm, much calmer than at any other time on our cruise. Hundreds of seabirds – fulmars, gannets, skuas and others – surrounded the ship out to a hundred metres or more, and all, or nearly all, floating calmly on the silky smooth surface. It felt as if they too were serenely enjoying the unusual tranquillity of the water, and the beauty of the surroundings. It all felt rather surreal, as if we had been put on the set of a film.

This all took place when we were just south and within sight of the Shetlands, quite close to the majestic island of Foula with its 350m vertical sea-cliffs on the western side. Since then we have been travelling westwards on the last outwards leg of our route, before we will return to Mingulay for some more cold-water coral sampling.

Today’s blog is written by Tingting Shi from the National Oceanography Centre Southampton.

Dissolved organic matter (DOM) consists of the very smallest breakdown products of particles. When cells die and get consumed by bacteria, or disintegrate due to infection by viruses, or when partially digested remains are excreted by zooplankton, formerly intact cells separate into smaller pieces. These pieces come in an array of different sizes, with the very smallest making up the DOM. DOM is defined in a practical way, as any organics able to pass through very fine filter papers, ones with gaps only 0.7 microns (0.7 millionths of a metre) in diameter. Anything smaller than 0.7 microns is classified as DOM, anything larger is classified as particles. On this cruise I am studying DOM and in particular DOC, the carbon in the DOM. 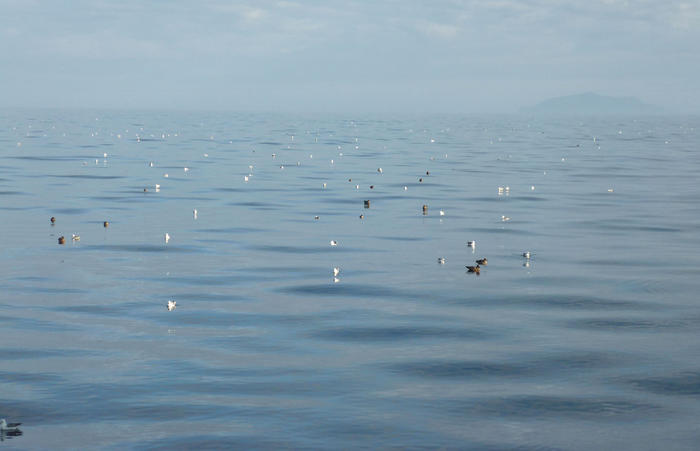 There are several reasons why we care about DOC. For a start it is one of the major carbon reservoirs on the Earth. Also, DOC mixed downwards from the surface ocean plays an important role in the “biological pump”, which refers to processes that remove carbon from the upper ocean and redirect it to the deep ocean. It may also be responsible for some inaccuracies in carbon chemistry calculations (including calculations of CO2 from other measurements), something we are investigating on this cruise. Finally, DOM is a food supply for vast populations of bacteria and other microbes.

The main origin of DOM is photosynthesis by phytoplankton in the surface ocean, while the dominant loss is through consumption by microbes. 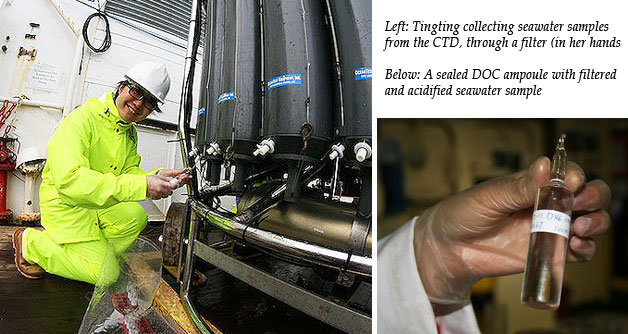 I am also studying ‘transparent exopolymer particles’ (TEP), sticky phytoplankton exudates that tend to glue other particles together. The sinking of particles can be accelerated when they are stuck together by TEP, because larger ‘aggregates’ sink a lot faster than do single particles. Phytoplankton exudation, especially by diatoms, is the main source of TEP. Since TEP are unusually rich in carbon, sinking of TEP may export more carbon to the deep ocean than other mechanisms. 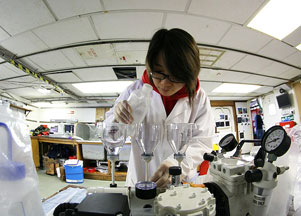 Some studies have already found increased productivity and carbon uptake at high CO2 levels. And the effects of ocean acidification on carbon uptake appear strongest with nutrient limitation. Under these conditions, ocean acidification may also increase the rates of DOC and TEP production, which in turn may favour carbon-limited bacterial production and potentially further enhance nutrient limitation (because particles sink more readily, taking nutrients and carbon down with them, and also because bacteria thriving on the extra carbon may take up more nutrients).

I have been taking seawater samples for DOC and TEP measurements from both CTD stations and bioassay experiments. CTD sampling covers several depths from surface to deep water to help understand the vertical distributions of DOC and TEP and their contributions to the ‘biological pump’. Analysing the bioassay samples can help work out the effects of ocean acidification on DOC and TEP. Also, the measurements of DOC and TEP will be compared with the estimates of their production and dynamics from the uptake rates. 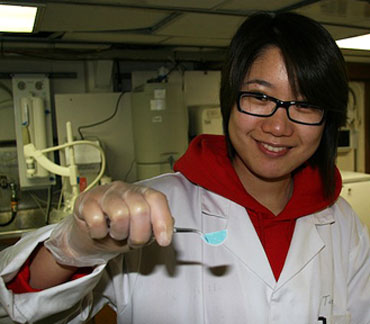 I work out how much DOC there is by removing other forms of carbon except for DOC, and then measuring what’s left. To remove particles including living organisms, when I collect seawater from the CTD I collect it through a filter (see photo). I then put the filtered seawater into glass ampoules (see photo). Finally, to remove inorganic dissolved carbon I add hydrochloric acid until the pH drops to <2. This removes the inorganic carbon and halts any biological processes that may affect DOC in the samples. The ampoules are then sealed for storage. These samples will be analysed after the cruise in the lab. I will measure DOC using a high temperature combustion technique. The principle of this technique is to burn all of the organic carbon compounds left in the samples (i.e., the DOC). This converts the carbon into CO2, which can then be detected by the instrument I use. 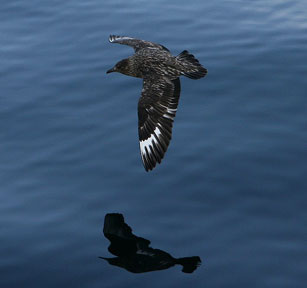 I am analysing TEP using a dye. Seawater samples collected for TEP are filtered through filters with extremely small holes (0.45 microns). In contrast with DOC, when measuring TEP (a type of sticky particle) I am interested in what is retained on the filters, not what passes through. The filters are then stained with Alcian Blue, a dye that is absorbed by TEP and stains it blue, but which is not absorbed by other particles. The amount of Alcian Blue adsorbed onto the filter should be directly related to the amount of TEP retained on the filter. The bluer the filter, the more TEP I have filtered. Analysis of the samples will be carried out back in the lab after the cruise.