Today our routine of collecting scientific samples has been interrupted by the arrival of the predicted rough weather. We are now heading out towards the deep Atlantic, roughly at the location shown by the red dot on the cruise map. 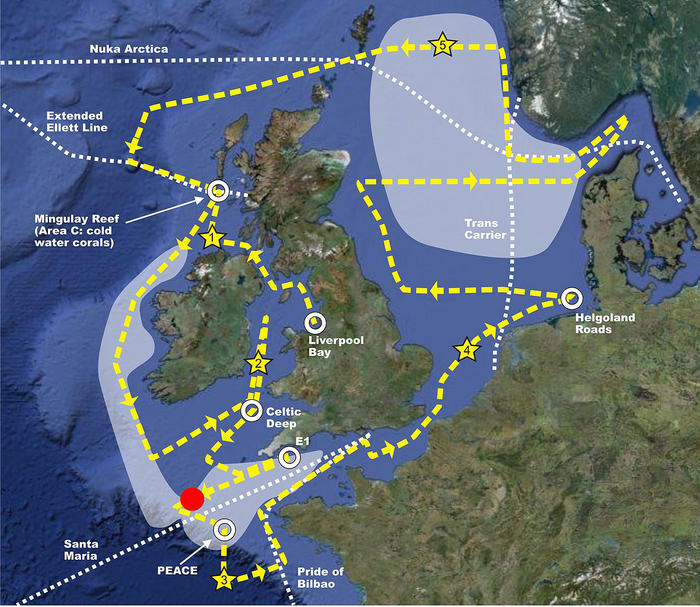 The last couple of blog entries have described ways in which we measure the composition of the biological communities in the water. Today we move onto climate impacts of ocean acidification, as Frances Hopkins, from Plymouth Marine Laboratory, explains her work on DMS with Steve Archer.

You may never have heard of the gas dimethyl sulphide, or DMS, but it is actually both rather important and rather familiar. The reason it is familiar is because it contributes to the ‘smell of the sea’; it is a key ingredient in the cocktail of gases released from the oceans that gives the seaside (and seaweed) its distinctive smell. The reason it is important is because DMS is a gas that helps control our climate. 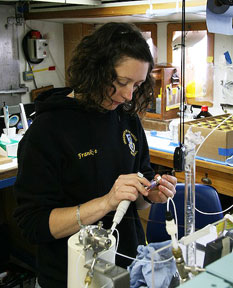 DMS starts off as another substance with an impressively long and complicated name, dimethylsulfoniopropionate, but which can simply be called DMSP. Phytoplankton produce DMSP to protect themselves against the stress of living in salty seawater (it’s not easy being algae), and when the phytoplankton die or are grazed by bigger plankton (zooplankton), the DMSP is broken down to DMS. As phytoplankton are found in every drop of sunlit seawater, DMS is present throughout the entire surface ocean. As a result, this gas is emitted to the atmosphere in huge quantities. And, in a nice link to another focus of this cruise, the coccolithophores are one of the most prolific producers of DMSP of all the phytoplankton as we found yesterday when we measured some of our highest levels of DMS yet in coccolithophore-rich waters. 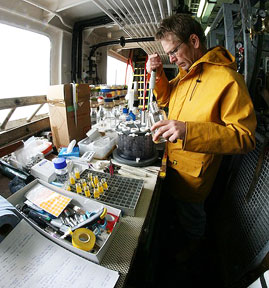 Then some really clever stuff happens in the atmosphere. DMS quickly reacts with the air to form sulphate aerosols, or, in other words, tiny particles. These particles influence the climate in two ways. Firstly, the particles themselves can scatter and absorb the sun’s energy. Secondly, they encourage the formation of clouds, which reflect the sun’s energy. Thus DMS has a cooling effect on our climate by reducing the amount of heat from the sun that reaches the earth. In fact without DMS, it has been estimated that our climate would be around 4°C warmer. And for that we can be grateful to our little phytoplankton friends. 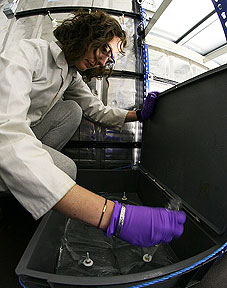 Now, we are interested in investigating how the production of DMS/P may be affected by ocean acidification (OA). And why?  Because if we were to see a significant change in DMS/P production in response to OA, this could affect our climate. For example, a drop in DMS could lead to a climate warming, on top of the warming caused by CO2.  So while aboard RRS Discovery, we are measuring how the amounts of DMS/P change in response to different levels of CO2 in the bioassay experiments. We are also investigating how fast the phytoplankton are producing DMSP, and how quickly bacteria are gobbling up DMS.

This all involves a lot of chemical analysis, and also some biology. We use two GCs (Gas Chromatographs) with different kinds of detectors (a flame photometric detector and a mass spectral detector) to measure DMS and DMSP in seawater and phytoplankton cells, and also a flow cytometer (described two days ago) which cleverly sorts phytoplankton cells into different sizes and types. We hope the information we get during this expedition will be of great use to climate modellers, helping them to predict the climate of our future high CO2 world.