The risks of carbon dioxide leakage through submarine ‘chimneys’ 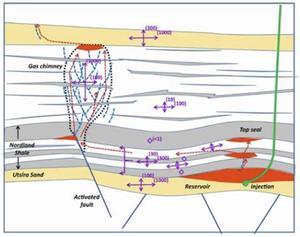 NOC scientists are playing a key role investigating the risks of leaks from carbon dioxide (CO2) storage reservoirs situated under the seabed.

Researchers from the National Oceanography Centre (NOC) will work with academics at the University of Southampton, who are leading the project, and the University of Edinburgh to better understand the risks involved in the storage of CO2 in depleted oil and gas reservoirs and saline aquifers in the North Sea.

Carbon Capture and Storage (CCS) is recognised as an important way of potentially reducing the amount of CO2 added to the atmosphere, and oil and gas reservoirs and saline aquifers are the preferred storage locations of most European nations. However, a key element in the safety of such storage is to fully understand the risks of any leakage.

The NERC-funded Characterisation of Major Overburden Leakage Pathways above sub-sea floor CO2 Storage Reservoirs in the North Sea (CHIMNEY) project will explore chimney-like structures in sub-seafloor North Sea sediments that are considered to be possible pathways for the transfer of fluids and gases to the seafloor.

Dr Angus Best, who is leading this project from the NOC, said “I am really excited about this ambitious seismic experiment - it could become a method for detecting the weak spots in submarine sediment that would otherwise potentially comprimise the integrity of storage sites. We need to understand this process of potential CO2 leakage in order to help marine CCS site selection and check integrity.”

The location and potential size of any possible CO2 leakage at the seafloor is critically dependent on the distribution and permeability of fluid pathways in the marine sediments overlying any proposed storage reservoir. This bold marine seismic experiment aims to detect anisotropy around a North Sea chimney structure, and to relate that anisotropy to fracture networks and permeability through laboratory experimental and modelling studies. If successful, the seismic methods developed here could be used to detect overburden weaknesses at other proposed sites around the world, needed to help mitigate greenhouse gas emissions into the atmosphere.

Significant ‘chimney’ structures will be studied in the North Sea which are visible on seismic cross-sections of the sub-seafloor geology. It is believed that these chimney structures are potential weaknesses through which fluids, including CO2, could escape through the otherwise impermeable muddy overburden sediments that seal geological CCS reservoirs. The North Sea is already the site of some small-scale CO2 storage.

The four-year CHIMNEY project aims to develop better techniques to locate these sub-seafloor structures and determine the permeability of the pathways so that they can be better constrained and quantified.

Researchers will undertake a major fieldwork programme in 2017 to a chimney structure in the North Sea. The team will carry out a unique geophysical experiment to determine the internal structure of the chimney, including high resolution seismics led by the NOC’s Dr Mark Vardy. The rock physics laboratory at NOC, led by Dr Best, will use state-of-the-art laboratory experiments on samples of the chimney to determine the physical laws governing frequency-dependent seismic anisotropy. This information will enable the Edinburgh academic Dr Mark Chapman to develop a theory for interpreting the seismic marine data.

This project will build on over ten years of joint research in this area between the NOC, the industry-funded BGS Edinburgh Anisotropy Project and Edinburgh University. The results will help determine the novel seismic properties of the chimney structures and assess their permeability.

The project will also work closely with GEOMAR, in Germany; the Lawrence Berkeley National Laboratory, in California; CGG, in the UK; and Applied Acoustics, in the UK.