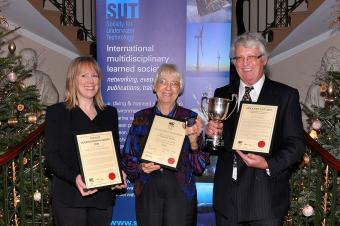 The SUT is an international marine science and technology Learned Society, established in 1966, and for many years has presented an Oceanography award to individuals who have made significant contributions to marine science, especially when pushing the state of the art in obtaining ocean observations.

Citing the panel’s assessment for making the award, Steve Hall, SUT Chief Executive, said “Professor Holliday has worked for three decades in international ocean science observation and programme coordination, starting her career in 1990 as a staff scientist on the World Ocean Circulation Experiment where she was introduced to sea-going fieldwork, progressing through some 20 long-duration research cruises including five so far as Principal Scientist.

“Her research specialises in using observations and computer models to understand the ocean circulation and variability of the subpolar North Atlantic, and the role of the ocean in climate change. She is well known for her work on the Extended Ellett Line, one of the world’s longest-running ocean observation time series, and for improving our understanding of the complex processes that take place where Atlantic and Arctic meet – key areas for operational oceanography and met ocean observations that are important to industry as well as to governments, the defence sector and climate science.

“Penny has supervised PhD and Masters students and is currently the Associate Head of the Marine Physics and Ocean Climate Group at the NOC. She has successfully bid for several million pounds of research funding over the last decade, leading to investment in sustained ocean observing systems of benefit to a wide oceanographic research community.

“Professor Holliday is not only a world class research scientist with 54 peer-reviewed papers, she is noted within the community as a strong advocate for encouraging women to thrive in science, technology, engineering and mathematics disciplines and is active in outreach and encouraging the next generation.”

Commenting on the award, Prof Holliday said, “It is a huge honour to be given the SUT Oceanography Award and I'm very grateful for the recognition that it brings. Throughout my career I have benefitted from the support of many people around me, including past recipients of this award. It is wonderful that I am now in a position to support others build their careers in this fascinating subject of oceanography.”

Previous recipients of the award have included Prof Scott Glenn, Prof Karen Heywood, John Turton, and in 1997 Dr John Gould and David Ellett – which is particularly relevant to Penny as her work has built upon the efforts of Ellett and Gould to quite a large extent.