Prestigious Award for Head of NOC 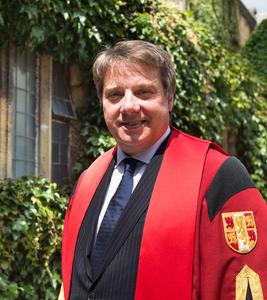 The Executive Director of the National Oceanography Centre, Professor Ed Hill OBE, has been awarded an Honorary Fellowship from Bangor University for services to marine science.

Ed was a former postgraduate student at the university, taking an MSc and PhD in Physical Oceanography, and was later a member of the academic staff in the School of Ocean Sciences. He was appointed Officer of the Order of the British Empire in 2010 for services to environmental sciences and also received an Honorary Doctorate in 2011 from the University of Sheffield.

In a career spanning more than 30 years to date, Ed’s research experience is in continental shelf sea processes, in particular, density driven flows such as frontal jets and dense water cascades. He took up his current position as Executive Director at NOC in 2010 where he had previously worked as a Director and he also serves on a number of international bodies.

An Honorary Fellowship is a highly-prestigious award, recognising distinguished contributions made by individuals in their field.

Speaking after the graduation ceremony at Bangor University, Ed said ‘I am honoured and humbled to have been awarded an Honorary Fellowship from Bangor University, where I spent many happy and productive years in my early career both a postgraduate student and member of staff. Bangor University, with its Marine Science Laboratories at Menai Bridge, is a leading centre of excellence in ocean science, as attested to by truly ground-breaking contributions to marine research and the excellence of its worldwide community of graduates.”