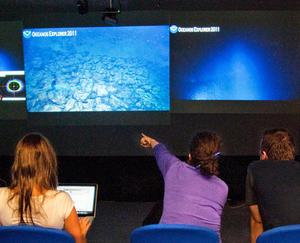 Scientists of the National Oceanography Centre (NOC) have been exploring the depths of the Cayman Trough without leaving Southampton, thanks to a ‘telepresence’ link from a US ship in the Caribbean.

Last year a UK research cruise led by Dr Doug Connelly of NOC found and sampled hydrothermal vent fields on the Mid-Cayman Spreading Centre (MCSC) for the first time. In August 2011, the RV Okeanos Explorer returned to the MCSC to explore the area further as part of the United States’ National Oceanic and Atmospheric Administration’s (NOAA) Ocean Exploration program.

Unusually for a research cruise, the RV Okeanos Explorer only has two scientists aboard: Professor Paul Tyler from the University of Southampton, and Dr Chris German from Woods Hole Oceanographic Institution (WHOI) in America. But the ship is linked via satellite to a shore-side ‘command centre’ in Rhode Island, where a full science team, including University of Southampton Ocean and Earth Science PhD student Diva Amon, has been keeping watch and helping to direct operations.

In addition, the Ocean Exploration Program has broadcast three high-definition video feeds, real-time audio, and oceanographic data across the internet, allowing scientists at NOC to watch remotely operated vehicle (ROV) dives live, and interact with the team aboard ship. Bryan Norman and colleagues from the NOC Information Technology Group in Southampton set up equipment to receive the video and data feeds, and display them across the 5-metre-wide rear-projection screen at NOC.

Highlights of the expedition have included the discovery of live tubeworms on an undersea mountain in the Cayman Trough, near the vent field discovered by the UK team last year. Bringing together scientists around the world to explore the Cayman Trough together has proved useful in refining targets for future investigation. A second UK research cruise is already in planning to return to the MCSC, led by Dr Jon Copley of the University of Southampton.