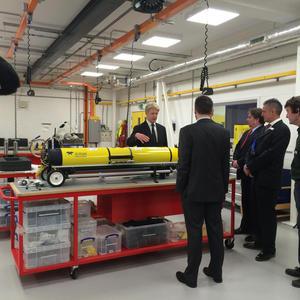 A £3 million centre to develop new technology for the emerging marine robotics sector was officially opened by Science Minister, Jo Johnson, on 23 November 2015.

Addressing some of the leading figures in marine technology development, Jo Johnson, Minister of State for Universities and Science said: “I was honoured to open the new Marine Robotics Innovation Centre at the UK’s world class National Oceanography Centre in Southampton. The UK is leading the way in marine science and this new facility will help to put wind in the sails of our marine industry.”

The National Oceanography Centre’s (NOC) Marine Robotics Innovation Centre will be a hub for businesses developing autonomous platforms, with novel sensors that will be used to cost-effectively capture data from the world’s oceans.

Professor Ed Hill, the NOC’s Executive Director, said “The launch of the Marine Robotics Innovation Centre is a very important development, because it is all about turning great science into great innovation for the benefit of the UK economy.

Autonomous measurement systems for the ocean have grown out of demands for frontier science in extreme environments. Much like space science, oceanography too creates spin-offs which bring technologies back into more everyday use for a wide range of applications.

Marine Autonomous Systems offer to transform the work of many sectors, including environmental monitoring. For example, they will improve data collection for weather and climate prediction, for defence, and for the emerging needs of offshore energy and other industries.

Not only are there multiple applications but the UK also has a diverse, vibrant sector of small technology companies able to take the innovations to wider markets. We will be working alongside several of these companies in the centre and engaging with the associate members, who are likely to be major users of the technology developed there.”

There was a programme of tours, events and seminars throughout the day, given by business leaders, engineers and academics associated with the marine autonomous systems sector.

The Marine Robotics Innovation Centre has been operational since the summer of 2015. Planet Ocean Ltd, ASV and SeeByte Ltd have already moved into the centre, which provides office and testing facilities along with access to specialist instrumentation.

The NOC has been working with leading people from industry and academia in the development of vehicles, battery design, and operational procedures. Advance training for PhD engineers coordinated by NOC has also recently been announced.