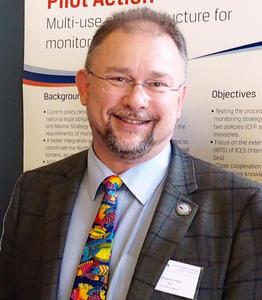 The IOC acts as the custodian of ocean science within the UN system through a number of global programmes and has also established international tsunami warning systems amongst many other activities.

Steve’s election as Vice Chair enables the UK marine science community to have a voice at the centre of IOC-UNESCO, enabling the community to network, and promote capabilities, technology and values into shaping how international marine science programmes, policy and legislation evolve over the next few years.

Steve commented “I look forward to combining this new role with my multiple other ‘hats’ at NOC, MSCC, SUT and the European Marine Board. Through working with IOC we can help instigate the international science that is needed to deliver the UK’s shared marine vision of clean, healthy, safe, productive and biologically diverse oceans and seas.”

Julie Pringle-Stewart, Director of Finance and Operations added “We are delighted that Steve has been elected as an Officer of IOC-UNESCO. Having a clear voice in the leadership of the IOC is a crucial place for the NOC to be and I know Steve will work hard with all his international colleagues to push forward the remit of the IOC in the coming years.”

In addition to Steve’s election, the UK delegation took an active role in the main plenary plus working groups on finance, capacity development, future of IOC, nominations, GEBCO and the 2nd International Indian Ocean Expedition. The UK delegation’s activities over the past year have been very well received by many member states at IOC, particularly in relation to the Policy Brief 13 focusing on the Future of the IOC.

The policy brief was developed principally by Steve Hall, with editorial support from Roland Rogers and Jennifer Riley, in conjunction with the UK National Commission for UNESCO (UKNC). This policy brief was the first publication that the UK-IOC delegation has produced with UKNC. The aim of the brief is to encourage discussion and debate between member states regarding the future activities and remit of IOC. We hope to publish further Policy Briefs in conjunction with the UKNC and other IOC ‘Group 1’ states.