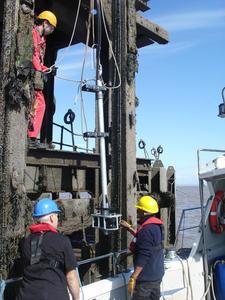 Engineers from the National Oceanography Centre (NOC) have been repairing and upgrading key instruments of the UK’s coastal flood warning system ahead of the winter, after winning a new contract from the Environment Agency.

Devastating storms and high tides affected thousands of homes and businesses throughout last autumn and winter, costing billions of pounds worth of damage. The national spotlight has since been focused on what the UK can do to bolster its flood warning systems and coastal defences in case storms this winter are as severe. As many as four million people are at risk from coastal flooding around the UK.

NOC plays a key role in advising the government and its agencies about extreme tides, sea levels and coastal flood risks and scientists at NOC have developed cutting-edge technology that is used within the coastal warning systems.

There are 42 sea level observing stations – or tide gauges - around the UK which are maintained by NOC on behalf of the Environment Agency. The latest contract work has comprised upgrades and emergency repairs to 12 of these gauges. Engineers have been repairing damage from last year’s bad storms and installing back-up systems and new technology to make the measuring and reporting systems more resilient.

The coastal flood warning system for the UK was established as a direct result of the worst natural disaster to affect the country in recent times – the 1953 North Sea storm surge. The current tidal gauge systems are designed to provide the most reliable estimates of extreme water levels in a consistent way around the entire UK coastline.

NOC engineers have been installing new radars which can be used as emergency gauges if the primary channels get cut off due to severe waves. They have also installed mobile phone technology which will send data back in the event of the main data networks being unavailable.

Professor Kevin Horsburgh, who is the Head of Marine Physics and Ocean Climate at NOC, said “The latest contract from the Environment Agency highlights NOC’s important role in the national coastal flood warning partnership. We are constantly developing innovative sea level measuring technology and our science makes a significance contribution to the country’s coastal defence policy and investment.”

The contract began in mid-August and the upgrade and work will be completed with a final diving operation this month.