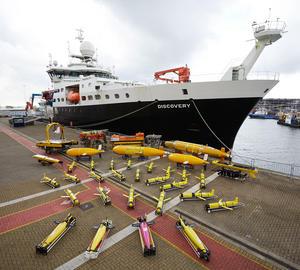 A new UK Robotic and Autonomous Systems (RAS) Strategy was published this week and launched at an event attended by the Science Minister, Rt Hon David Willetts MP.

This was the result of nearly two years’ work by a Special Interest Group (SIG) set up by the Technology Strategy Board (TSB), which the National Oceanography Centre (NOC) participated in. Earlier, the Minister announced a new wave of government investment in British innovation, which sees £400 million pounds earmarked for key sectors including the marine industry and an ongoing commitment to robotics.

For nearly two decades NOC has been at the forefront of developing and deploying such systems in hazardous marine environments in depths of up to 6,500m, as well as under Antarctic Ice shelves. Now numbering about 40 vehicles, the fleet is the largest in Europe and includes a Remotely Operated Vehicle (ROV) capable of transmitting live HD imagery from the seabed, as well as a wide array of unmanned surface vessels and submarines.

One of the projects highlighted at the Strategy launch was a Small Business Research Initiative (SBRI) to develop a new breed of unmanned surface vehicles (USV). These would be capable of gathering data from the oceans for several months and would be powered primarily by energy harvested from the environment. The project was initiated by NOC and jointly funded by its parent body, the Natural Environment Research Council (NERC) and the TSB.

This led to the creation of two vehicles: AutoNaut, developed by Chichester-based MOST (Autonomous Vessels) Ltd. and C-Enduro, developed by Portchester-based ASV Ltd. AutoNaut is a 3.5 metre USV which uses wave power to propel itself, while C-Enduro uses solar and wind power as its main energy sources. Professor David Lane, the lead author of the RAS Strategy, recently announced the purchase of a C-Enduro by his own group at Heriot-Watt University.

The RAS 2020 Strategy presents a vision for innovation in one of the Government’s ‘Eight Great Technologies’ and aims to bring together innovators, researchers and potential end-users to build on UK successes in these areas. Its key priorities include developing and operating new tools for working in harsh environments and ensuring that technological innovations are demonstrated in real world environments.

Welcoming the latest funding and commitment to robotic technologies, the Director of National Marine Facilities at NOC, Geraint West said “The new RAS strategy reaffirms the importance of robotics within the UK and echoes many of features of NOC’s technology programme. Technological innovation is central to NOC’s recognition as a world-leader in developing new robotic and autonomous systems to increase our understanding of the critical role of the oceans in driving the Earth system.”