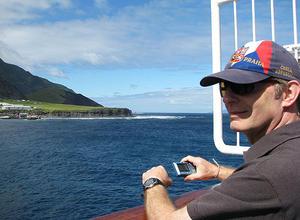 I am delighted that Peter’s huge contribution to marine science has been recognised.

A prestigious award for achievement in underwater technology has been won by a marine physicist based at the National Oceanography Centre (NOC) in Liverpool.

The David Partridge Award for Underwater Technology 2012 has been presented to the NOC’s Peter Foden at a ceremony at Trinity House in London.

Bottom pressure (or pelagic tide gauge) measurements are a technique in which the NOC’s Liverpool centre, formerly the Proudman Oceanographic Laboratory (POL) is world-leading. They have been used in the development of modern ocean tide models and in the science that follows from them, such as knowledge of the rates of tidal dissipation in different parts of the ocean. The measurements remain of great importance to oceanography and complement those of ocean mass by space gravity satellites. They are central to research into sea level and climate change.

Peter joined the Deep Sea Tide Gauge group, founded by Dr David Cartwright FRS, at the Institute of Oceanographic Sciences (POL’s predecessor) at the Bidston Observatory in Wirral in 1977, working with colleagues to develop increasingly deeper, longer-deployed and specialised devices for the measurement of tides and non-tidal signals in bottom pressure, the latter for ocean circulation studies.

These have included the Mk 4 Bottom Pressure Recorder (BPR) which was the first UK instrument capable of a one-year deployment in the deep ocean; Rapid Lander, for the UK Rapid Climate Change project; Micro Lander, a smaller device for possible urgent deployments, and MYRTLE and MYRTLE-X which are devices capable of ten-year deployments.

Peter has made or supervised over 200 deployments of instruments, from the Northwest Atlantic, to the tropical Atlantic and the Brazil Shelf, the South Atlantic, Indian Ocean – and in the Southern Ocean, which includes 24 years of deployments in the Drake Passage to monitor the Antarctic Circumpolar Current.

NOC Executive Director, Professor Ed Hill, warmly congratulated Peter on his achievement. He said “Our excellence in the vital area of bottom pressure measurements is thanks, in great part, to Peter and his team’s work over three decades. I am delighted that Peter’s huge contribution to marine science has been recognised, and all of his colleagues will wish to join me in offering their warmest congratulations on this prestigious award.”

Peter also leads a small team who operate tide gauges at eight sites in the South Atlantic and Antarctica as part of Global Sea Level Observing System (GLOSS). Working with the Intergovernmental Oceanographic Commission he has helped establish tide gauges throughout Africa and at sites in the western Indian Ocean to form part of the international tsunami warning system and to provide a denser coverage of sea level monitoring. Part of that work involved the development of advanced telemetry providing high data rate connections to tide gauges, and other instruments, virtually anywhere in the world. Peter and colleagues were awarded the IMarEST Denny Medal for that work.