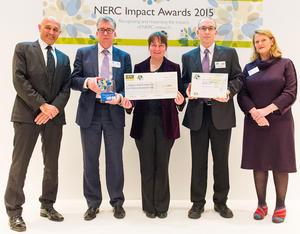 The winners of the Natural Environment Research Council’s (NERC) inaugural Impact Awards have been announced at a prize-giving ceremony in London, with scientists from the National Oceanography Centre (NOC) amongst those being recognised for their work.

Professor Kevin Horsburgh and his extreme sea levels team at NOC were the runners-up in the Societal Impact Award category, for their research into protecting homes and lives from coastal flooding.

The Impact Awards were established to acknowledge the value of NERC science to the UK’s economy, society, wellbeing and international reputation and rewarded impact in four categories: economic, societal, early-career and international.

More than 80 applications were whittled down to two finalists in each category. The winners were then selected by a panel of judges. The awards were given out at the event on 27th January 2015, which was hosted by scientist and broadcaster Professor Jim Al-Khalili.

The work carried out by Professor Horsburgh and his team builds on decades of NOC research into storm surge forecasting and extreme sea level statistics. Recent findings on tide and storm surge independence have led to the calculation of extreme sea level statistical estimates around the entire UK coastline, to aid coastal defence design. Further work using complex mathematical models shows the sensitivity of storm surge generation to tiny errors in modelled weather systems, which gives a better understanding of worst case scenarios. Their research has influenced government policy for coastal defence and helped to establish the framework for replacing the Thames Barrier.

Speaking after the ceremony, Professor Horsburgh said, “I am tremendously proud to receive this award on behalf of the team. The storms that battered the UK during December 2013 and January 2014 marked some of the most severe weather in recent years. Our science has led to significant improvements to forecasting systems. Thanks to these warnings, and to improved coastal defences, there were no fatalities and there was time to evacuate properties. It’s great to know that our research makes a difference.”

Each winner received a prize of £10,000 to further the impact of their research, with the runners-up receiving £5000. A further £30,000 was awarded for the overall prize. A trophy and a total of £40,000 was awarded to overall winners Professor John Pyle and Dr Neil Harris from the University of Cambridge and the National Centre for Atmospheric Science for their work to demonstrate the effect of man-made gases on the ozone layer.