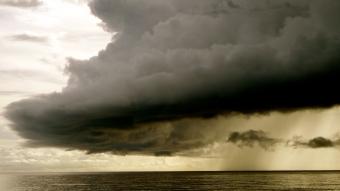 A new understanding of the timing and development of strong El Niño events has resulted from recent research by scientists at the National Oceanography Centre (NOC). This pioneering work was enabled by new analysis of results from a very high-resolution global ocean model.

The model, which needs a supercomputer to run, is being developed for improved seasonal forecasting and climate change research.

El Niño events have a dramatic impact on the climate of North, Central and South America, and also affect the climate of Europe and Africa. Improved prediction of these events may be important for securing UK food supplies post-Brexit, given the likely increase in trade with countries bordering the Pacific that are impacted by El Niño events.

The NOC study revealed that the process starts early in the year when seasonal winds off Central America cause a slight lowering of sea level. The resulting depression in sea level then moves westward, arriving in the west Pacific in mid-year.

The study found that strong El Niños occur when the depression arriving in the western Pacific is much deeper than usual. This then causes the North Equatorial Counter Current (NECC) to transport a large volume of warm water towards the central Pacific.

Here it triggers deep atmospheric convection which, by changing the large scale circulation of the atmosphere, produces the dramatic impacts on climate.

Changes in the winds then allow the NECC to carry warm water even further east, strengthening the El Niño and resulting in warm nutrient poor water reaching the Central and South American coastline around Christmas. This leads to large-scale deaths amongst fish and sea birds and seriously affects the lives of fishing communities along the coast.

Lead author and NOC Emeritus Fellow Dr David Webb said “Most of the processes involved are well understood but there remains a problem in predicting how the region of low sea level changes as it moves westward across the Pacific. Once this is properly understood we should be able to predict strong El Niño events up to a year in advance”.

The development of the high-resolution global ocean model and the computer runs for this study were funded primarily by Natural Environmental Research Council (NERC) National Capability funds and Computing funds. The research also forms part of DRAKKAR, an international collaborative project which is aimed at improving ocean models.

A copy of the paper, published in the journal Ocean Science, can be found by following this link https://doi.org/10.5194/os-14-633-2018. The paper is published with a Creative Commons licence so figures can be used without charge. One that might be useful is figure 13 which contrasts the model sea surface temperatures in a normal year with a year during which a strong El Niño developed.