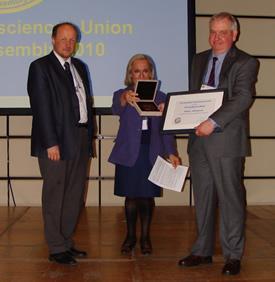 The 2010 Vening Meinesz Medal of the European Geosciences Union (EGU) was awarded to Professor Philip Woodworth of the National Oceanography Centre in recognition of his outstanding contributions to sea-level research.

Prof. Woodworth is a senior scientist at the NOC, Liverpool, and his research deals with understanding the trends and variability in sea level with the use of tide gauge and satellite information.

Prof. Woodworth was responsible for the Permanent Service for Mean Sea Level (PSMSL), the global databank for sea-level changes, for 25 years. This database is used throughout research into climate change, ocean circulation, geology and geodesy. The medal citation notes his unique leadership role in fostering sea-level research worldwide, and recognises his unselfish service to the oceanographic and geodetic communities.

Prof. Woodworth has particular interests in what is called ‘data archaeology’, which concerns the rescue and re-analysis of sea-level and meteorological information from the 18th and 19th centuries and even before. These rare historical data sets help to put the changes seen during the 20th and 21st centuries into a long term context.

Prof. Woodworth has been a lead or contributing author for each of the Intergovernmental Panel on Climate Change (IPCC) research assessments and has published more than 110 refereed articles on sea level in high impact journals.

He has also worked on a number of projects in geodesy. In particular, he played an important role inside the European Space Agency in making the case for the Gravity Field and Steady-State Ocean Circulation Explorer (GOCE) mission launched in March 2009, the main scientific objective of which is the determination of the geoid with unprecedented accuracy and resolution (1 cm and 1 degree). GOCE data will be applied widely to oceanography and geophysics, for example in determining the mean ocean dynamic topography.

In accepting the award from Prof. Markku Poutanen, President of the Division on Geodesy, and Prof. Susanna Zerbini, Chairperson of the Geodesy Awards and Medals Committee, Prof. Woodworth expressed his gratitude at being linked with such an excellent geophysicist as Vening Meinesz and his satisfaction at the sea-level and geodetic communities now working so closely together.

This medal is presented by the European Geosciences Union (EGU) Division on Geodesy in recognition of the scientific achievements of Felix Andries Vening Meinesz, a Dutch geophysicist and geodesist best known for his invention of precise methods for measuring gravity at sea.