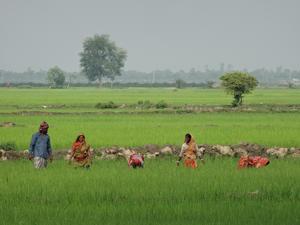 A computer model that aims to provide physical information on the Bangladesh delta to policy makers there, has received the ‘impact’ award from the national super-computing facility, ARCHER.

This is the first model to link the open ocean with the limit of tidal interaction in Bangladesh, and has been produced by the National Oceanography Centre (NOC) scientist Dr Lucy Bricheno using the ARCHER facility.

This model predicts changes in tidal water level and salinity in the delta region, and could be used to make decisions about how to manage the physical environment, such as where to take irrigation water from and what crops to grow.

Future scenarios forecast by the model show the tidal range increasing by up to half a metre in places, which could see a large area of the delta flooded during high tide; affecting farmland, and the Sundarbans mangrove forests (a UNESCO world heritage site)

Dr Bricheno said “I am really pleased that this award has recognised the important potential social and economic impacts of this model... this region is home to large numbers of people whose wellbeing is critically dependant on the land, and so are vulnerable to changes in the physical environment. By providing high quality evidence and forecasts, the outputs of the model could really help policy makers to make more informed decisions about how to best manage that environment.

What was interesting about the tidal change evident in the model is that it had a complex spatial pattern - not just rising everywhere. This is important because it wouldn’t be captured in a coarse ocean model - we need to simulate the whole delta.”

The model also showed that in general the west of the delta and the Sundarbans mangrove forest got saltier, particularly during the dry season, which has important implications for the health of the forest and any crops planted there. The western part of the delta is also home to some of the poorest farmers in Bangladesh and the habitat of the Royal Bengal tiger.

The model uses and produces high-resolution 3-D maps of the delta, its rivers, and the Indian Ocean. Bathymetry data is used in conjunction with information describing river discharge, ocean tides, water temperature and salinity from other models. However, since the model is complex, and of high resolution (containing around 2 million nodes), the run-time is around one week per year of data. Therefore the large ‘super-computing’ power offered by the ARCHER supercomputing national facility is required.

Dr Judith Wolf, who is leading the NOC’s contribution to this project, called ESPA Deltas, said “This international collaborative research is pushing oceanography into new areas, working further inland than ever (to reach the limit of tidal penetration), and leading us to collaborations with human geographers and social scientists.

ESPA Deltas investigates how the bio-physical environment of the delta impacts on human population and livelihood for some of the poorest people on the planet. The NOC’s role within this international multidisciplinary project is to contribute world-leading expertise in hydrodynamic modelling.