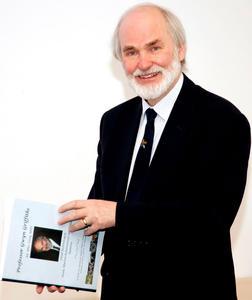 The National Oceanography Centre this week said farewell to a research leader who has been at the forefront of UK underwater technology development for three decades.

Professor Gwyn Griffiths, the centre’s Chief Technologist and founding Head of the Marine Autonomous and Robotic Systems (MARS) facility retires this month after a 36-year career with NOC and its predecessor institutions.

Gwyn is perhaps most closely associated with the Autosub programme, which led the way in the development of autonomous underwater vehicles in the UK. These are provided for the national marine science community by NOC, on behalf of the Natural Environment Research Council and have been instrumental in a series of important scientific discoveries.

Formerly the Head of NOC’s Ocean Technology and Engineering Group, Gwyn was responsible for leading technology and engineering at the Institute of Oceanographic Sciences (IOS) at Wormley in Surrey, before it moved south in 1995 to form the Southampton Oceanography Centre (which became NOC in 2010) alongside the University of Southampton’s School of Ocean and Earth Science and research vessel operations.

Before that (from 1989-93) he worked on the interface between physical oceanographers and ocean instrument developers at the James Rennell Centre for Ocean Circulation, following 13 years as a development engineer within the Applied Physics Group of the IOS (1976-89).

Since October 2000 Gwyn has been part-time Professor of Underwater Systems Engineering within the Fluid Structure Interaction research group in the School of Engineering Sciences at the University of Southampton. Among outside appointments he has been Vice President and Chairman of Council of the Society for Underwater Technology.

Gwyn was named NOC’s inaugural Chief Technologist in 2011. The title signals the importance the centre places on the promotion of its capabilities in this field to a range of stakeholders, including technology funding bodies, the marine research community, industry and Government.

NOC Executive Director, Professor Ed Hill, paid tribute to Gwyn. He said “Gwyn Griffiths has been central to NOC’s emergence as one of the world’s major players in developing autonomous underwater instruments, and his immense contribution to taking our science forward cannot be overstated. His leadership, intellect and commitment will be hugely missed, but he leaves a rich legacy that includes a team of first-class engineers and technologists, and the MARS facility which will consolidate his work into a key facility for the UK oceanographic community.”