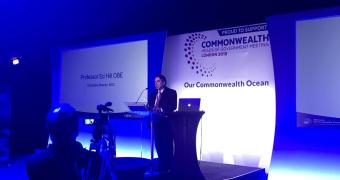 On show with participation from a wide section of the UK marine science community was a wide range of displays ranging from litter and plastics, sustained ocean observations, ocean acidification, corals, coastal resilience, the Seaweed Star project focused on safeguarding the seaweed aquaculture, women in science, and the UN Decade of Ocean Science for Sustainable Development 2021-2030.

On show involving NOC, was the Commonwealth Marine Economies Programme, a collaborative project between the NOC, Cefas and the UK Hydrographic Office, which aims to help the most vulnerable Small Island Developing States (SIDS) make the most of their natural maritime advantages, to enable sustainable economic growth and alleviate poverty. A new containerised marine environmental laboratory system, developed as part of the programme, was unveiled for the first time to visitors with an autonomous surface vehicle operating in the dock outside the NOC building and a mini remotely operated vehicle on display.

Other areas of research on show included the NOC’s work on analysing microplastics in the deep ocean, the role of ‘blue carbon’ in coastal ecosystems, and the SOLSTICE project a four-year collaborative project funded by the UK Global Challenges Research Fund (GCRF), which brings together local knowledge and international research expertise to address challenges facing the Western Indian Ocean (WIO) region in a cost-effective way.

NOC’s autonomous vehicles were on display including Autosub Long Range AKA ‘Boaty McBoatface’ and those undergoing development as part of the Oceanids project. There was also a live video link to the RRS James Cook off the coast of Namibia, to discuss the current expedition, part of the ORCHESTRA project, and to talk to crew members holding a Commonwealth Big Lunch.

NOC’s Executive Director, Prof Ed Hill, welcomed attendees to the NOC this morning and commented, “I am delighted that the National Oceanography Centre has been able to support the Department for Environment Food and Rural Affairs with this Commonwealth Marine Science Event to showcase the crucial importance marine science in the lead up to the Commonwealth Heads of Government Meeting in London next week.  The health of the ocean is now prominent in public awareness worldwide and is rapidly rising up the international agenda – but we still know more about the surfaces of Mars and the Moon than most of the seafloor. The event today has helped demonstrate the importance of science and international scientific cooperation in informing and shaping solutions to the challenge of safeguarding the future health of ocean ecosystems - which are wonders of nature, but also essential to the support all human life on Earth, and can underpin valuable marine economies if used sustainably”.

International work to protect these vital marine habitats is gathering momentum as coral reefs come under increasing pressure from climate change and human activity, and today the UK officially joined the Coral Reef Life Declaration, committing to safeguard coral reefs and bolster scientific research into the threats they face.

From Australia’s iconic Great Barrier Reef, to 8,000 year-old cold-waters corals off the coast of the UK, the countries of the Commonwealth account for nearly half the world’s coral reefs – and over 250 million people across the Commonwealth depend directly on coral reefs for food and income.

Speaking from the NOC, the Environment Minister Thérèse Coffey said, “Few people know the waters around the UK contain riches to rival the tropics – with our waters home to a vast array of cold water coral reefs that protect important marine life.

“Through tapping into the UK’s world-leading marine science and working with our partners across the Commonwealth, we will help to safeguard this vital habitat and protect our oceans for future generations.”

The Coral Reef Life Declaration was launched by Prince Albert II of Monaco at the Our Ocean conference in Malta in October last year to encourage countries to come together to protect coral reefs. So far, 12 countries have signed the declaration, including Australia, Fiji and the Seychelles.

The UK’s waters are home to cold-water corals over 8,000 years old, with the only known coral reef in English waters protected as a Marine Conservation Zone (MCZ). In 2015 the NOC investigated these waters finding rich ecosystems on steep sided canyons, which were recorded by video cameras on remotely operated vehicles.