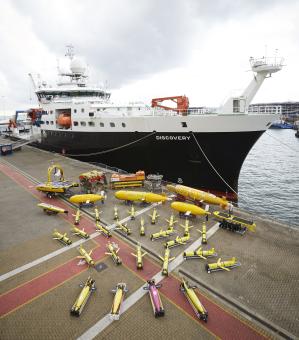 Findings from a new review into the future of oceanographic research infrastructure have revealed the significant changes that must be made to enable the UK to deliver a Net Zero Oceanographic Capability (NZOC).

The report – which supports UK Research and Innovation’s (UKRI) target of becoming net zero by 2040 – was led by the National Oceanography Centre (NOC) working with seven other leading UK institutions and provides recommendations that will lay the foundations for ongoing reductions in carbon equivalent (CO2e) emissions from the current research infrastructure and embed sustainability across key parts of oceanographic research.

Dr Kate Hendry, Lead scientist for the project from the University of Bristol, said: “Marine science faces a critical dilemma in the next few years. As ocean scientists, our work is going to be essential in addressing global Net Zero objectives, with ship-based observations a key component of understanding how the ocean is changing as a source or sink of atmospheric carbon. But – at the moment – sea-going research vessels use considerable amounts of fossil fuels. So, we have to achieve Net Zero, at the same time as maintaining and building our marine science capability in a fair and equitable way. Working on the NZOC project has shown me that this is going to be a challenge, but it can be done, and co-design of new approaches and emerging technologies are going to play a major part.”

The report identifies a range of options for developing an exceptional oceanographic capability with a zero-carbon footprint. Key findings highlighted the need for a re-wired oceanographic ecosystem which no longer has large, multi-role research ships at its centre. Instead, lean-crewed, green-fuelled vessels capable of deploying large and energy intensive equipment, whilst acting as a hub within the wider ecosystem of autonomous platforms, will be a key enabler for future marine scientific research. The findings included:

Chief Executive of the National Oceanography Centre, Professor Ed Hill, said: “Developing the technology and putting in place the infrastructure for sustained, systematic ocean sensing – the ocean underwater internet of things – is vital to advancing knowledge and understanding of the rapidly changing ocean and for designing and evaluating solutions for managing that change. The challenges now are to massively grow the global ocean sensing without having to increase the number of fossil-fuel-burning research ships to service it.

“This could be achieved through expansion of the ocean observational footprint of existing ships by deploying autonomous sensing platforms to work in tandem with them during expeditions. As part of the wider green shipping transition, preparation for new ways of working with a new generation of zero emissions, more automated, global research and survey ships is likely to be possible in the decade beyond 2035, which will play a vital and distinctive role in multi-platform underwater ocean sensing and exploration.

“From being grossly under-sampled in the 20th and early 21st centuries, we can expect to see ocean science transform into ‘big data, big science’ commensurate with its importance to human wellbeing and prosperity, and with ocean action decisions informed by a sustained, global ocean information infrastructure fed by sensors in the ocean and interpreted with digital twin oceans.”

The review was led by Leigh Storey, Associate Director for National Marine Facilities at the National Oceanography Centre. He said: “By initiating a review of how the UK might transition to a net zero oceanographic capability, Dr Iain Williams (NERC Director Strategic Partnerships) enabled a group of experts to work together to consider what might be required in the future and how technology would enable that. Large research vessels will remain a part of the mix but operated very differently and powered using green fuels. That is only possible by scaling up the use of alternative platforms (satellites, uncrewed surface vessels, autonomous underwater vehicles and floats) to deliver on the vision of a global observing network across the ocean. Novel sensors and digitisation of the ocean will underpin this transition.”

The review identified the need for:

Leigh Storey added: “In order for the UKRI sustainability strategy to become a reality, a plan to reduce CO2 emissions whilst continuing to support oceanographic science is required. Delivery of outstanding marine science with a low-carbon footprint may require the UK to reshape its entire research capability. To achieve this, significant investment in new technologies, modes of operation and effective partnerships will be required.

“People will remain central to the delivery of the current capability as well as to the transition to the NZOC, but suitably qualified and experienced personnel continue to be difficult to recruit and retain, so investment in training is at the core of our recommendations.”

Professor Paul Tyler, Emeritus Professor at the University of Southampton, said: “The NZOC report is a clear and visionary pathway for the reduction of the carbon footprint of UK oceanographic science whilst enhancing scientific capabilities, technology development, advanced technical training and greater inclusivity.”

Dr Iain Williams, Director of Strategic Partnerships at NERC, part of UKRI, said: “This report clearly demonstrates the importance of readying our marine research operations to meet the UKRI’s net zero carbon emissions target by 2040. Oceanographic research helps us better understand our climate and weather systems, important ecosystems and sustainable maritime economic growth. By embedding sustainability across all our marine operations, we can continue to support world-leading research while working to achieve net zero.

“The report also shows the opportunity that working towards net zero oceanography presents to enhance collaboration across the global marine science community, increase diversity and accessibility of ocean science, and to harness new and emerging tools and technologies that will increase our research capability.”