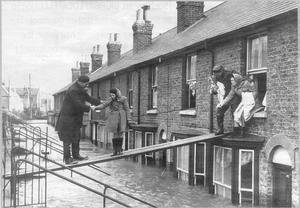 Scientists at the National Oceanography Centre (NOC) have helped to compile a new database of coastal flooding in the UK over the last 100 years, which will provide crucial information to help prevent future flooding events.

The database on the ‘SurgeWatch’ project website contains information on 96 large storms, taken from tide gauge records going back to 1915. The storm characteristics listed include the highest sea level recorded during the storm and a description of the coastal flooding it caused. This database, which is described in the journal Scientific Data, has been produced by a team of researchers, from the NOC and the British Oceanographic Data Centre (BODC), led by the University of Southampton.

Professor Kevin Horsburgh, Head of Marine Physics and Ocean Climate at the NOC, says “This new database allows us to improve our understanding of the statistics of extreme sea levels around the UK. Coastal flooding remains a threat to life and to economic and environmental assets. Even if there is no future change in European storminess, the slow rise in mean sea level will increase the number of times that defence thresholds are exceeded.”

Prompted by the 2013–14 storm season, researchers on this project spent over 18 months compiling records of high sea level events and coastal flooding going back 100 years. Using meteorological data, they were able to identify the large storms that produced the recorded high sea levels, investigate the weather conditions that caused them and track of each storm. Many hours were spent reading old reports, books, news articles, blogs and websites, in order to estimate the extent and scale of the coastal flooding.

Elizabeth Bradshaw, the sea level data manager at BODC, advised on the format of the database and metadata required, as well as contributing extensive knowledge of the UK tide gauge network. The BODC, which is maintained by the NOC, provides free access to relevant data as well as preservation of historical records.

“Was the 2013–14 season unusual? Yes, very much so” said Elizabeth Bradshaw, “Seven out of the 96 storms in the 100-year database occurred during the 2013–14 storm surge season, and two of the top highest sea level occurred during that season. Both of these events also rank highly in terms of spatial footprints, i.e., they impacted very large stretches of the UK coast.”

SurgeWatch is free and accessible to a range of users, including scientists, coastal engineers, managers and planners. The team aim to expand and update the database and are appealing for the help of the general public.

Dr Matthew Wadey, a postdoctoral researcher in Ocean and Earth Science at the University of Southampton, adds: “Do you have any photographs of coastal flooding from recent or past events, which you are willing to share with us? We would like to compile and investigate these in order to improve our understanding of exactly which areas were flooded and to what water depth. Photos can be easily uploaded to our website.”