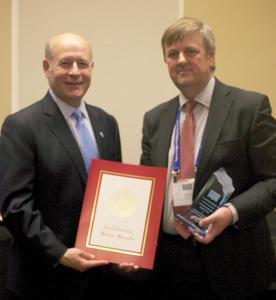 The National Oceanography Centre (NOC) and the University of Southampton have been presented with the ‘International Maritime Partner’ award at the annual ‘BlueTech & Blue Economy’ summit in San Diego, in order to recognise their ongoing engagement with The Maritime Alliance.

The summit, organised by The Maritime Alliance, seeks to promote sustainable growth within marine and maritime sector through developing common solutions to global challenges.

The award was presented by Dr Richard Spinrad, Chief Scientist at the National Oceanic and Atmospheric Administration (NOAA), to the NOC and the University of Southampton. Geraint West, the Director of National Marine Facilities, who received the award on behalf of the NOC said “The Maritime Alliance is internationally recognised for its work in bringing together diverse partners in the Blue Economy. It is therefore extremely pleasing that NOC’s engagement with the global marine business community has been recognised in this high profile way.”

The University of Southampton and the National Oceanography Centre (NOC) are at the heart of the vibrant Solent Maritime Cluster in the UK. Together, the University and the NOC support a wide range of marine sectors in their region.

Professor Ajit Shenoi, Director of the Southampton Marine and Maritime Institute at the University of Southampton, said “This award recognises the scholarship and distinction in the works of researchers and academic staff in Southampton and the strength of international collaborations being achieved through the Southampton Marine and Maritime Institute. Our partnership with the Maritime Alliance Foundation of California demonstrates the potential for deep connections between industrial clusters in our two regions.”

Since 2007, the NOC has hosted the biannual Ocean Business show and conference, which in 2013 had 4,111 visitors from 65 countries. The NOC works closely with industry, particularly in the field of marine autonomous systems.

Kevin Forshaw, Head of Enterprise and Research Impact at the NOC, said “The research expertise of the NOC is relevant to industry regardless of their location, and this award recognises ongoing efforts to reach out to organisations engaged in the San Diego Blue Tech cluster, as well as clusters in the USA and Canada.”