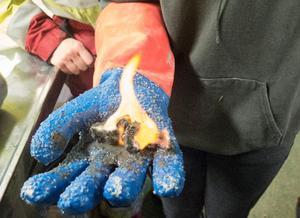 Methane seeps from seafloor deposits near Svalbard release less ‘greenhouse gas’ into the atmosphere than other Arctic sites because ocean currents there form an effective barrier.

This research, by scientists at the National Oceanography Centre (NOC) and the University of Southampton, was published this week in the Journal of Geophysical Research: Ocean.

Dr Carolyn Graves, the lead author of the study from the NOC, said “Strong ocean bottom currents carry the dissolved methane northwards, while bacteria consume it to produce carbon dioxide. This slows and reduces the volume of methane rising up through the ocean towards the atmosphere.”

The Arctic contains large volumes of methane stored in forms that turn into gas if temperatures rise or the pressure they are subject to decreases. These forms include methane trapped in marine sediment beneath permafrost as hydrate – a form of methane ice. If methane gas escapes from these deposits, as well as from seafloor reservoirs, it could add to atmospheric warming, causing a positive climate forcing feedback.

More than 250 plumes of methane gas were discovered rising from the seafloor near Svalbard in 2008. This gas is likely released from methane hydrate destabilized in seafloor sediments beneath about 400 metres water depth. Very high dissolved methane concentrations were observed near the seafloor, while much less methane was present in the surface waters that are in contact with the atmosphere. Researchers used these observations to set up a simple model of physical and biochemical processes. This model shows that strong ocean bottom currents prevent the direct release of the greenhouse gas into the atmosphere.

Dr Doug Connelly from the NOC, and a co-author of this paper, said “While this research shows that methane coming from the seafloor is not reaching the atmosphere in this particular location near Svalbard, there are areas that have more methane hydrate deposits. These may still pose a high risk of increasing global environmental change if released”.

This research involved scientists from seven institutes in the UK, Germany, and Switzerland and forms part of the NOC’s ongoing investigation into the relationship between processes happening at the sea floor, the ocean and the atmosphere. This study received funding from: The Natural Environment Research Council (NERC), the Graduate School of Ocean and Earth Science (University of Southampton, UK), and a Natural Sciences and Engineering Research Council of Canada Postgraduate Scholarship.