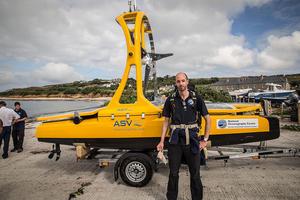 How marine robotic vehicles can map and monitor the ocean – and the National Oceanography Centre’s (NOC) experiences of using them – is one of the subjects being discussed at this year’s international WhaleFest event, taking place this weekend at the Brighton Centre.

Chief Scientist of the Marine Autonomous and Robotic Systems (MARS) facility at NOC, Dr Russell Wynn, is giving a talk on how marine robotic vehicles are transforming the way scientists and policy makers map and monitor marine life in the ocean. By citing the recent demonstration of NOC’s marine autonomous vehicle fleet as part of the ‘Exploring Ocean Fronts’ project, Russell is explaining how they are able to successfully image plankton and fish in the water column, detect echo-locating cetaceans and photograph cetaceans and seabirds at the sea surface.

In addition, Russell will be helping the next generation of oceanographers by offering them careers advice as part of WhaleFest’s careers speed dating event, open to anyone over the age of fourteen.

Dr Russell Wynn said “I am really enthusiastic about this opportunity to inspire the next generation of oceanographers with the exciting possibilities that NOC’s marine autonomous vehicles offer for marine ecosystem monitoring.”

WhaleFest is the largest event of its kind, created to help protect whales, dolphins, marine life and oceans. It will include science and campaign talks from well-known guest speakers in the field, including Steve Backshall, Michaela Strachan and Monty Halls, plus engaging features such as the digital whale-watching experience.

Russell’s talk on marine robotics will take place at 15:30 on Sunday 15 March, with the careers speed dating event at 16:30 on Saturday.