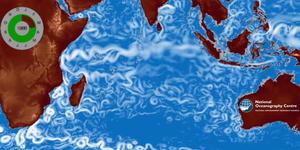 Preliminary insights into the potential pathway of the plane wreckage that washed up on Reunion Island yesterday morning, thought to be from the missing MH370 flight, is provided by researchers at the National Oceanography Centre (NOC).

If a plane crashed into the South East Indian Ocean, any debris floating on the surface could have ended up on Reunion by one of two possible scenarios.   In the first scenario it would have initially been carried northwards in a large ‘round-a-bout’ system of currents in the South Indian Ocean – called a ‘subtropical gyre’. It would have then been swept westward, towards Reunion Island, in a relatively fast moving band of water known as the South Equatorial Current. This westward flowing water moves across the entire Southern Indian Ocean at the same latitude as northern Madagascar, however it can be partly deflected towards Reunion when it meets the Mascarene Plateau near 60°E. The speed of this current varies, although it can reach up to 50 centimetres a second.

An analysis of a global ocean simulation, provided by the NEMO model, gives rise to the second scenario. In this situation it appears possible that the debris could have been carried more or less directly westwards by a complex pattern of swirling currents, which include features known as “eddies”. These are rotary current structures which travel slowly westwards.

The likely timescales for these routes could be between one year for the more northerly route and two years for the directly westward route. More detailed analysis is currently underway at the NOC, including the direct tracking of surface floating particles, to confirm the likelihoods of these pathways and timescales.

The NEMO ocean model was developed by an international consortium, including the NOC. The model provides full depth coverage of ocean currents, temperatures and salinities. It has also been used to track the movements of oil spills.

Professor Adrian New, an expert in Indian Ocean currents at the NOC, said that the discovery of the plane wreckage in Reunion might be consistent with a possible crash site in the South-East Indian Ocean though other crash sites cannot definitely be ruled out.