Global project to map ocean floor by 2030 gets underway 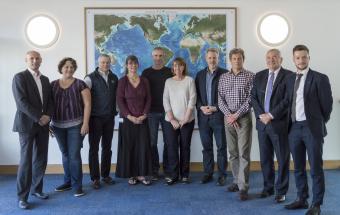 Seabed 2030 aims to map the entirety of the ocean floor by 2030. It will compile all available and newly collected bathymetric data into a single high-quality, high-resolution digital model of the ocean floor and promote international collaborative efforts to collect new data. The project was announced by the chairman of the Nippon Foundation at the UN Ocean Conference on SDG-14 last year.

The ambitious project will draw upon the experience of a growing network of more than 28 institutions and organisations around the world. The National Oceanography Centre (NOC) will serve as the Global Centre, supported by four Regional Centres, each with responsibility for mapping a region of the world’s oceans. The NOC will integrate the regional grids into a global map and distribute the data to end users around the world. It will also act as the central point for the coordination of common data standards and processing tools.

Seabed 2030 will build on the NOC’s contribution and commitment to the efforts of GEBCO - under the auspices of the International Hydrographic Organization and the Intergovernmental Oceanographic Commission - to provide the most authoritative, publicly-available bathymetry data sets for the world’s oceans.

The oceans cover over two-thirds of our planet and yet we have more comprehensive maps of the surface of Mars than of our own seafloor on Earth. Developing a comprehensive global map of the seafloor will assist worldwide efforts to combat pollution, aid marine conservation, improve forecasting of extreme weather, and better understand tides, wave action, and sediment transport.

The NOC’s Dr Graham Allen, Chief Information Officer at the NOC and Head of the British Oceanographic Data Centre (BODC), is a member of Seabed 2030 Establishment Team and the GEBCO Guiding Committee. He said: “This is an exciting initiative to bring the international ocean mapping community together with the aim of producing a definitive map of the ocean floor by 2030 for the benefit of all. We look forward to the work ahead and the NOC and BODC’s involvement as the Global Data Assembly and Coordination Centre.”

The Chairman of the Nippon Foundation, Mr Yohei Sasakawa, commented: “The Nippon Foundation alone cannot achieve the objectives of this ambitious project. We will need the support of diverse stakeholders, including maritime corporations and technical experts. It is crucial that the ocean community comes together to achieve this goal.”

The General Bathymetric Chart of the Oceans (GEBCO) is a joint project of the International Hydrographic Organisation (IHO) and UNESCO’s Intergovernmental Oceanographic Commission (IOC). Originating from the GEBCO chart series initiated in 1903 by Prince Albert I of Monaco, GEBCO is the only organization with a mandate to map the entire ocean floor, and aims to provide the most authoritative, publicly-available bathymetric datasets for the world’s oceans.

The Nippon Foundation is a private, non-profit, philanthropic foundation established in 1962. Using revenue from motorboat racing, the Foundation pursues social innovation, assistance for humanitarian activities, and global ocean management, incorporating the ideals of social development and self-sufficiency as it works to improve public health and education, alleviate poverty, eliminate hunger, and support persons with disabilities.