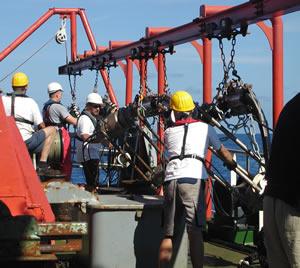 University of Southampton scientists based at the National Oceanography Centre, Southampton, along with US and Indonesian collaborators have uncovered clues as to why some undersea earthquakes generate huge tsunamis. Their findings may help explain why the 2004 Sumatra ‘Boxing Day Tsunami’ was so devastating.

Early in the morning of 26 December 2004 a powerful undersea earthquake started close to Simeulue Island off the west coast of Sumatra, Indonesia and extended ~1200 km to the north. The resulting tsunami caused devastation along the coastlines bordering the Indian Ocean, with tsunami waves up to 30 metres high inundating coastal communities. With very little warning of impending disaster, over 230,000 people lost their lives and countless others were made homeless.

The picture above right shows geophysical equipment (‘airguns’) being deployed from the German Research Vessel Sonne in the Indian Ocean offshore Sumatra. The airguns are towed just behind the vessel and generate seismic waves from a source of compressed air. The waves reflect from layers within the Earth’s crust and the recorded data are used to reconstruct an image of the rock layers and deformation below the seabed.

Nearly four months later, on 28 March 2005, another strong earthquake (although significantly smaller than in 2004) occurred immediately to the south, but triggered only a relatively small tsunami that claimed far fewer lives, most of them on the island of Nias.

The largest undersea earthquakes occur at ‘subduction zones’ where one tectonic plate is forced (or subducts) under another. Large sections of plate can get stuck, causing deformation, and eventual slippage or rupture with the release of vast amounts of stored energy. 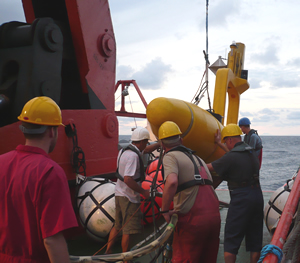 “Both earthquakes occurred on the same fault system, initiating 30-40 kilometres below the seabed. Our results will help us understand why different parts of the fault system behave differently during earthquake slip which then influences tsunami generation. This is critical for adequate hazard assessment and mitigation,” said Dr Simon Dean of the University of Southampton’s School of Ocean and Earth Science (SOES), which is based at the National Oceanography Centre, Southampton.

The picture right shows geophysical equipment being deployed from the German Research Vessel Sonne in the Indian Ocean offshore Sumatra. The equipment (a seismic reflection ‘streamer’ and the yellow tail buoy which marks the end of the streamer) is towed at the sea surface behind the vessel and records waves which have reflected from layers deep below the seafloor: the data are then used to reconstruct an image of the rock layers and deformation below the seabed.

Seismic reflection profiles collected by Dean and his colleagues crossing the Sumatra margin from northwest of Simeulue Island to Nias Island revealed differences between the plate boundaries of the 2004 and 2005 Sumatra earthquake ruptures.

Between the deep ocean sediments and the subducting oceanic basement of the Indian tectonic plate there is a surface, called the ‘décollement’ that forms the plane of slippage. At the plate boundary, the front edge of the overlying Eurasian plate acts rather like a bulldozer, scraping the material above the décollement up to form an ‘accretionary prism’.

The researchers discovered a number of unusual features at the rupture zone of the 2004 earthquake such as the seabed topography, how the sediments are deformed in the accretionary prism, and the locations of small earthquakes (‘aftershocks’) following the main earthquake. They also found that the décollement surface has different properties in the two earthquake rupture regions. These differences resulted in slip in the 2004 earthquake continuing further seaward and much closer to the seabed, potentially one of the factors causing a larger tsunami.

“By comparing our results with other subduction zones around the world, we believe that the region of the 2004 Sumatra earthquake is very unusual, suggesting that tsunami hazards may be particularly high in this region,” said Dr Lisa McNeill, also of the University of Southampton.

This research has been conducted as part of a Natural Environment Research Council (NERC) funded Consortium research project on ‘Sumatran Earthquake Segment Boundaries’. This project is led by Timothy Henstock and Lisa McNeill of the University of Southampton’s School of Ocean and Earth Science, based at the National Oceanography Centre, Southampton, and includes investigators from the Universities of Cambridge, Oxford, Liverpool and the British Geological Survey.

The diagran above shows a cross section of a subduction zone. Large earthquakes (and tsunami) are generated by slip along the décollement between the two tectonic plates.