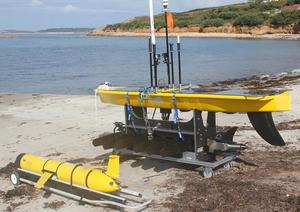 The final phase of a competition to develop novel Adaptive Autonomous Ocean Sampling Network (AAOSN) management systems for the National Oceanography Centre (NOC) is now underway. Two UK consortia will move forward to develop systems capable of coordinating a suite of marine autonomous vehicles gathering data from the ocean over periods of months, and tracking and sampling dynamic features.

The two-phase competition was launched last September by the Natural Environment Research Council (NERC) in partnership with the Defence Science and Technology Laboratory (DSTL) and Innovate UK, with £1.5 million being made available for the project. Phase one saw nine consortia submit feasibility studies, five of which were funded. After a review of the outcomes of the phase one studies, two consortia were invited to apply for phase two for the development of prototypes, which would be capable of undertaking demonstration missions at sea.

The two consortia moving forward to the final stage are led by SeeByte Ltd in partnership with ASV and the Marine Biological Association (MBA) and University of Exeter in partnership with Marine South East Ltd and the Met Office. Each will now spend the next 12 months developing their products, with the first test mission expected to take place in February 2016.

Mario Brito, Senior Risk Analyst at the NOC and Programme Manager for this SBRI call said “The problem set out in the AAOSN SBRI call was very challenging. The response was a number of very innovative approaches, presenting new ways for optimal ocean feature sampling using marine autonomous systems. We are all excited about the solutions proposed by the two winning consortiums and we are looking forward to work with the companies in phase 2.”

This is the second SBRI competition that the NOC has overseen. Last year’s competition to develop long endurance marine unmanned surface vehicles was won by ASV of Portchester and MOST (AV) Ltd of Chichester. Both companies have had considerable success in the sector since with sales in both the UK and export markets.

Geraint West, Head of National Marine Facilities at the NOC, said “We have been excited by the response to this challenge, as it represents truly cutting edge thinking in autonomous monitoring of the ocean. The previous competition produced two excellent surface vehicles which have already allowed us to explore new ways of undertaking science at sea, so the aim is that AAOSN will provide a truly transformation capability by enabling such vehicles to independently track features, for long periods of time.”