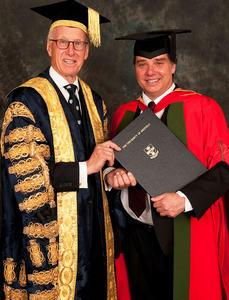 Professor Ed Hill , Executive Director of the National Oceanography Centre, receives an honorary doctorate from the University of Sheffield today.

Professor Hill is a physical oceanographer and an applied mathematics graduate of the University. He graduated from Sheffield in 1981 and completed his post-graduate studies at the University of Wales, Bangor (MSc, 1983, PhD, 1987).

Now an honorary Doctor of Science, Ed said “It is a great privilege to be awarded this honorary degree from a high-achieving Russell Group University, such as Sheffield. Like many of my generation, I was the first member of my family to go to University and my time at Sheffield was transformational. The University, which provided a solid foundation to the start of my research career, has gone from strength to strength over the past three decades and I am delighted and touched to have been recognised in this way.”

Tags:
Southampton
About Us
people
awards