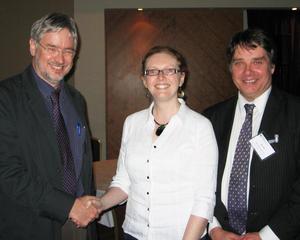 Stephanie Henson of the Ocean Biogeochemistry and Ecosystems group, National Oceanography Centre, was announced as the winner of the Early Career Research Award at the Science and Technology Symposium earlier this month.

They discovered that we will actually need as much as 40 years of continuous data to detect the effects of climate change on phytoplankton. This is because the natural year-to-year variability is so large that it masks any global warming-driven trend.

Stephanie gave a short presentation of her paper in a special after-dinner talk at the DST Science Symposium.

Established this year, the annual DST Early Career Research Award is open to scientists and technologists in DST who were awarded their PhD within the past 10 years (or within 12 years of attaining their first degree if they do not hold a PhD).

The award is given to the author/co-author of a paper published in an ISI peer reviewed journal that, in the opinion of the Panel of Judges, embodies research excellence with impact potential.

This year’s award takes the form of funding (up to £1000) for the attendance, as a representative of NOC, at a scientific conference related to the awardee’s field of research.