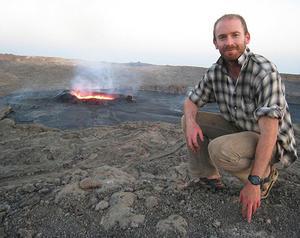 A prestigious award for early career scientists has been presented to Dr Derek Keir, a University of Southampton Lecturer in Earth Science, who is based at the National Oceanography Centre, Southampton.

The Jason Morgan Early Career Award is presented by the American Geophysical Union’s (AGU) Tectonophysics section and recognises the recipient’s outstanding research contributions at their career stage, as well as their exceptional future potential for continued achievement in the field of tectonophysics, which is concerned with movements and deformations in the Earth’s crust.

Derek, a member of the Geology & Geophysics group in Ocean and Earth Science, uses seismology to understand deformation processes at plate boundaries, with particular focus on the evolution of continental rifts through to formation of new ocean basins and associated passive continental margins.

His current research projects are based in the three rifts (East African, Red Sea, and Gulf of Aden rifts) forming the Afar triple junction and his work contributes to the understanding of the region’s tectonic evolution.

Derek is also interested in the interaction between magmatic and tectonic processes at volcanoes, as well as seismic and volcanic hazards associated with plate boundaries.

In addition to his active research, Derek is the coordinator of Ocean and Earth Science’s undergraduate remote sensing and GIS modules, and also contributes to teaching Geology field courses.

Professor Tim Minshull, Head of Ocean and Earth Science, says “I congratulate Derek on a very prestigious award – this degree of international recognition at an early career stage bodes very well for the future.”

Tags:
School of Ocean and Earth Science (SOES)
About Us
awards