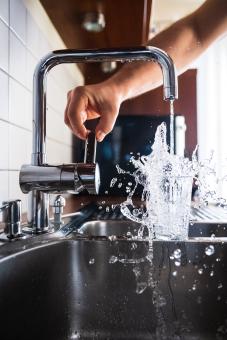 Research published this week shows that treating drinking water reduced the number of microplastic particles per litre by 99.99%.

One of the co-authors, Dr Alice Horton from the NOC, said “This is a key step in developing our understanding of human exposure to microplastics, suggesting that tap water will not contribute significantly to human uptake of microplastics, and is likely negligible compared to other routes of exposure.”

Cutting-edge methods were used to characterise and quantify microplastics in samples, with strict protocols to account for any contamination that may occur from the field or lab environment. On average, 4.9 microplastic particles were present in every litre of untreated water, reducing to only 0.00011 microplastics in a litre of treated potable water.

Professor Andrew Johnson of the Centre for Ecology and Hydrology (CEH) said: “While there is some public concern about the presence of microplastic particles in drinking water, the levels found were considerably less than has so far been reported in household dust and various food products in other studies.

“However, it should be stressed that so far we have insufficient information on whether microplastic particles are causing harm at current levels in the home or the environment.”

The work was funded by UK Water Industry Research, led by CEH and involved researchers from the NOC, Lancaster University and Aalborg University. It builds on the NOC’s cutting-edge research into marine plastic contamination, which aims to better understand the magnitude and persistence of exposure to plastics and the potential harms it can cause.