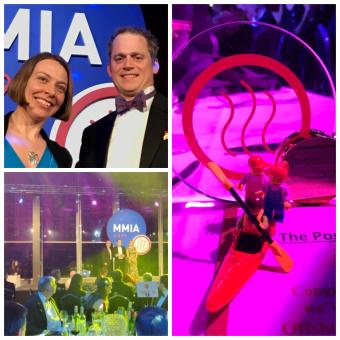 It was a double whammy for the NOC at the fifth annual Mersey Maritime Industry Awards, held in Liverpool this week (14 March), with two projects picking up top honours.

WireWall, led by the NOC’s Dr Jenny Brown, walked away with the ‘Positive Impact’ award, and the anyTide app, led by Dr Jeff Polton, was victorious in the ‘National Impact’ category. The awards were decided by an expert judging panel and a public vote.

The ‘National Impact’ award for anyTide celebrates an organisation making a positive national impact in the maritime sector, whether it’s substantial growth, job creation, cutting edge innovation, thought leadership, or increasing exports. anyTide UK is a mobile app that provides detailed tidal height and current predictions around the North Western European Shelf, with particular focus on the British Isles. The app, developed by the NOC in partnership with Winchester Innovation, is available for both Android and iOS devices.

The ‘Positive Impact’ award for WireWall was in recognition of a project whose remit or business model is to bring about positive measurable change, whether this is to the lives or living conditions of individuals, the community or in terms of campaigns, projects and initiatives that are changing perceptions about the industry. WireWall is an innovative and cost-effective system to help optimise sea defence design and early warning processes, reducing construction costs and ultimately protecting coastal communities. The project is being delivered as a partnership between the NOC and HR Wallingford.

Dr Jeff Polton said: “The idea of anyTide is simply a way of presenting something we've always excelled at – namely tides – in a 21st Century wrapping. So during this centenary year of the world-famous Liverpool Tidal Institute it is gratifying to see that our tidal research is still contemporary and that its applications are still valued. I have every expectation that for the next 100 years we will continue to deliver high impact coastal science. I wonder what that will look like.”

The NOC’s double win at the Mersey Maritime Industry Awards comes in the same week that saw WireWall featured in an article published in Nature, a leading international science journal.

Dr Jenny Brown said: “What a week for WireWall! An article in Nature followed by a Positive Impact award. On behalf of the team, I’d like to thank everyone that voted and have supported us over the last year. It has been a really positive, collaborative experience and I am looking forward to what comes next.”