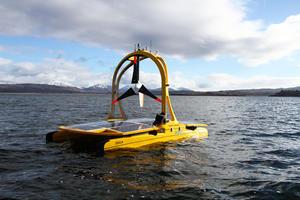 Two new generation ocean robots, developed by Hampshire companies ASV Ltd and MOST (AV) Ltd in collaboration with the National Oceanography Centre, are about to enter production as marine industries recognise the value of their cutting-edge designs and capabilities.

The new state-of-the-art Long Endurance Marine Unmanned Surface Vehicles (LEMUSV) – the AutoNaut by MOST (Autonomous Vessels) Ltd and the C-Enduro by ASV Ltd – will soon be entering the production phase with confirmed orders for both vehicles.

Designs for the C-Enduro and the AutoNaut were chosen by a panel of scientific and technical experts and the prototypes were developed in collaboration with the Marine Autonomous and Robotic Systems (MARS) team based at the National Oceanography Centre (NOC). They have since undergone rigorous capability trials in Portsmouth Harbour and off the coast of Oban in Scotland and have each proved to be rugged, robust and reliable. 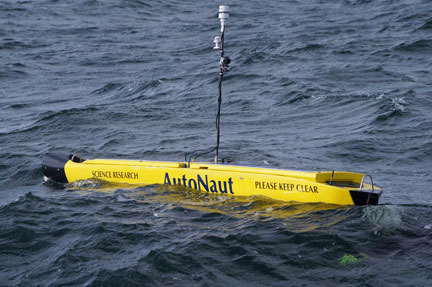 A wide range of sensors now exists to take measurements on the ocean surface, satellite navigation tools and communications for command and control are readily available and data transfer to shore is possible. There are also a number of feasible technologies available to provide the energy necessary for long deployment however it became obvious a new generation of LEMUSVs was required with greater capacity to carry this equipment for sustained periods and at a relatively low cost.

The two prototypes were designed and built as part of a government-backed Small Business Research Initiative (SBRI) aimed to develop ocean-going robotic vehicles that will carry out sustained marine research over long periods. The project has been co-funded by the Natural Environment Research Council (NERC), Technology Strategy Board (TSB) and the Defence Science and Technology Laboratory (Dstl).

The aims of the SBRI are to connect public sector challenges with innovative ideas from industry and to support those companies to generate economic growth and enable improvement in achieving government objective.

Geraint West, Director of National Marine Facilities at NOC said: “The LEMUSV SBRI project has been a very successful project, resulting in new and extremely novel capabilities for scientific observations at sea. Moreover, this has been a model example of UK industry working with public sector departments to mutual benefit. ”

Dan Hook, managing director of ASV Ltd said as a result of the SBRI competition, the forecast for the next two years is for £1m worth of orders for the C-Enduro LEMUSV.

“We expect orders to grow considerably after this as evidence of the capability spreads. We are certainly receiving a lot of interest from both within the UK and importantly from abroad.

“Some of the technologies that were developed or enhanced with the SBRI funding are of benefit to our other products and we expect to see an increase in the number and value of sales in these as an additional benefit. An example of this is the work that was done in utilising automotive radar technology for collision avoidance on the C-Enduro is now being applied to other vessels.”

“The National Oceanography Centre and the Natural Environment Research Council (NERC) were excellent to work with and we hope a good partnership has been built for the future.”

David Maclean, director of MOST (Autonomous Vessels) Ltd said over the duration of the SBRI project their staff has increased from two full-time and one part-time staff, to five full-time and five part-time staff. They have also received their first order – for a 3.5m AutoNaut – for an organisation in the USA.

“Throughout the project the NOC staff has been supportive and constructive with a positive outlook for the overall benefits to the UK of the development of these LEMUSVs. We now look forward to demonstrating to NERC marine scientists that these LEMUSVs have a significant role to play in gathering high quality data for their important work,” said David.

Stephen Browning, Head of SBRI at the Technology Strategy Board quotes “SBRI helps the public sector to engage with industry, particularly SMEs to develop solutions to difficult challenges. It is really great to see the potential of the National Oceanography Centre’s use of SBRI now coming to fruition, providing business opportunities for ASV and MOST while solving a need at the NOC.”

NOC now plans to use both LEMUSV vehicles in a project off the UK in the autumn to demonstrate the ability of a network of surface, subsurface and seabed autonomous systems to collect a wide variety of scientific data.