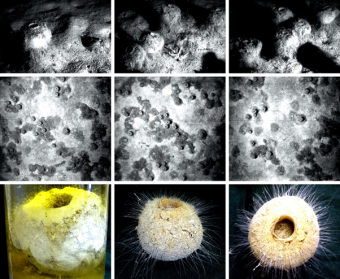 Deep-sea sponges in the Porcupine Seabight (NE Atlantic), regarded as vulnerable marine ecosystems, appear to have declined dramatically in recent decades as a result of fishing, according to research published today.

This work is based on a comparison of the abundance and distribution of the glass sponge Pheronema carpenteri studied by towed camera systems from Royal Research Ship Challenger in 1983/4 and again from RRS James Cook in 2011.

Historical data on satellite monitoring of commercial fishing vessels suggests that bottom trawling in the sponge grounds is likely to have occurred, and the NOC team photographed seafloor trawl marks during their 2011 survey.

Dr Brian Bett said: “Drawing on work published in 1990, we have seen a major reduction in the vulnerable marine ecosystem formed by clusters of these glass sponges”.

He continued: “This work also reminds us of the lasting value of NOC's historic data and biological specimen collections, and how they can assist in developing approaches to the protection of vulnerable marine ecosystems in the deep sea. This includes these sponge clusters, as well as the cold-water coral systems we monitor in the UK’s Darwin Mounds and Whittard Canyon Marine Protected Areas, as part of the Natural Environment Research Council’s Climate Linked Atlantic Sector Science project led by NOC”.

The research paper, published in the journal Progress in Oceanography and led by joint NOC – University of Southampton student Dr Rui Vieira, now based at the Centre for Environment, Fisheries & Aquaculture Science, Lowestoft Laboratory.