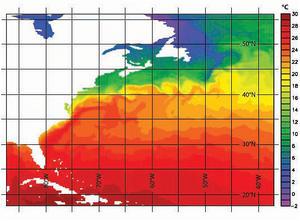 After last winter’s storms and flooding, 2012’s great winter freeze and a July heatwave this year, it seems to many of us that our Great British weather is becoming ever more extreme and increasingly difficult to predict.

Now scientists at the National Oceanography Centre have developed an upgraded ocean modelling system which will help lead to more accurate seasonal and longer-term forecasting of our weather.

The research has been carried out as part of the Joint Ocean Modelling Project (JOMP), which is an ongoing collaborative project between the Natural Environment Research Council (NERC) and the Met Office.

NOC is at the cutting edge of state-of-the-art ocean modelling in the UK and the new sophisticated computer model uses a global ocean model code called NEMO (Nucleus for European Modelling of the Ocean), which is also used by the Met Office. The ocean surface and the atmosphere are strongly linked and the Met Office is combining the upgraded model with models of the atmosphere, hydrology and land to predict weather patterns and potential future changes in the Earth’s climate system.

The Marine Systems Modelling team at NOC has spent the past four years working on upgrading the ocean component of this modelling system. Called GO5.0, it uses a grid with a finer resolution, giving more precise representation of the ocean and coastlines. While previous ocean models have used cells around 100 kilometres across, researchers now have the capability to resolve detail down to as little as 10 kilometres. As a result, GO5.0 is among the first models to be able to show the movement of eddies or ‘ocean weather systems’, similar to surface storms.

Studies on the new GO5.0 model were published in a NOC-led paper in the Geoscientific Model Development journal in June.

Thirty years worth of measured winds, rainfall and surface air temperatures, from 1976 to 2005, were applied to the surface of the model and the results were compared to direct measurements of the ocean over the same period.

Dr Alex Megann from NOC, who is the lead author of the paper, said “Including fine-scale features takes ocean modelling to a new dimension, which wouldn’t have been possible 10 years ago because of the huge amount of data that needs to be processed. However, latest technology and enhanced computer capabilities have meant we can gain much more insight into what happens in the ocean and how this can potentially affect our climate.”

NOC’s research will also have further international significance. GO5.0 will be used in the development of the new UK Earth System Model, which will constitute the UK’s contribution to the Intergovernmental Panel on Climate Change (IPCC)’s next assessment report, published in the next few years.

The full paper can be read at http://bit.ly/1oqJou6.