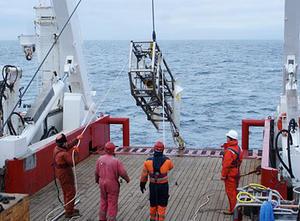 The science marathon is arriving to its last stage. A marathon is not an explosive running in which you just think about running at fast as possible, it requires a complete control of the time and understanding of how your body is behaving and acting in every single new step.

This cruise has been a marathon, were the timings and equipment have been completely measured and selected to accomplish our final goal, obtaining a large quantity and nice quality of data. In those last moments before arriving to the end, when a few metres seem an infinite distance, is when your mind needs to be stronger. Complete confidence for those last breathings has been deposited in DASI (our electromagnetic transmitter) which has been patiently waiting for those crucial moments. DASI has not been the star in this scientific show, but this last moment of glory is just a prelude for its important role in the prosperous 2013 Svalbard cruise.

Ten days of non-stop science has passed, with a mixture of tiredness and satisfaction signs in our faces. Tomorrow, we will be transiting back to Longyearbyen and on Tuesday flying back to the UK and France.

This is the end of this mini blog, but before closing it, I would like to express a feeling you may agree with: SCIENCE IS COOL!!!!!!!!!!